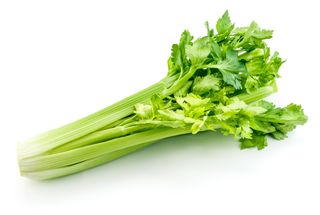 Celery is low in calories, but eating it does not result in "negative calories." Although celery contains a minuscule amount of calories, the number of calories spent digesting it is probably even smaller.
(Image: © Tim UR | Shutterstock)

Crunchy, crispy celery is well known for being low in calories, but its health benefits go far beyond use as a diet food. Celery contains useful phytonutrients, vitamins and minerals. It’s a convenient on-the-go snack as well as a vegetable that can be incorporated into cooked dishes, stir-fries and salads.

Unlike some vegetables, celery retains most of its nutrients even if it is steamed. A study published in the journal LWT – Food and Science Technology compared celery that had been steamed, boiled and blanched and discovered that 10 minutes of steaming allowed the vegetable to maintain 83 to 99 percent of its antioxidants. On the other hand, boiling and blanching led to 38 to 41 percent antioxidant loss.

Celery should be eaten within seven days of buying it, according to World’s Healthiest Foods. After five to seven days, significant amounts of the antioxidants in celery disappear. Additionally, more healthy flavonoids stick around in freshly chopped celery than celery that is chopped and stored.

According to Megan Ware, a registered dietician nutritionist in Orlando, Florida, “Since celery is mostly made of water (almost 95 percent), it is not particularly high in any vitamin or mineral.” Nevertheless, celery is a good source of vitamin K, with one cup containing about 30 percent of the recommended daily intake, according to the U.S. Food and Drug Administration (FDA). Celery can also help you get enough folate, potassium, fiber and molybdenum. It contains small amounts of vitamin C, vitamin A and some B vitamins. Its seeds are a natural diuretic, according to the University of Maryland Medical Center. “Celery is naturally low in calories, carbohydrates, fat and cholesterol,” added Ware.

Here are the nutrition facts for celery, according to the U.S. Food and Drug Administration, which regulates food labeling through the Nutritional Labeling and Education Act:

One stalk of celery contains only about 10 calories, while a cup of chopped celery contains about 16. It also contains dietary fiber (1.6 grams per cup), which helps curb cravings because it absorbs water in the digestive tract, making you feel fuller longer. A recent study published in Annals of Internal Medicine suggests that simply adding more fiber to one’s diet can be a critical component of weight loss.

Unfortunately, it’s not true that eating celery counts as “negative calories.” In fact, Ware explained, “although celery contains a minuscule amount of calories, the number of calories spent digesting it is probably even smaller.”

Celery is rich in phytonutrient antioxidants that contain anti-inflammatory properties. A study in the journal Nutrition and Cancer revealed that it is a significant source of flavonols and flavone antioxidants in Chinese adults. According to World’s Healthiest Foods, celery’s phytonutrients include: phenolic acids, flavones like luteolin, flavonols like quercetin and kaempferol, dihydrostilbenoids, phytosterols and furanocoumarins.

A study published in Molecular Nutrition & Food Research suggests that celery juice and celery extracts may help reduce activity by tumor necrosis factor alpha (TNF-A) and nuclear factor kappa B (NF-KB), proteins that are linked to inflammatory problems. Another study published in Planta Medica suggests that the luteolin in celery may be able to inhibit the production of COX-2, an enzyme that triggers inflammation.

According to Ware, celery is about 95 percent water. This can make it a good way to keep necessary fluid levels up. “Because of its high water content, celery is a great snack to have on hand during the hot summer months to prevent dehydration,” said Ware.

Celery is an old folk remedy for heartburn, and AARP recommends it because of its low acidity. A study published in Annals of Otology, Rhinology & Laryngology included celery in a “low acid” diet prescribed to patients suffering from acid reflux. While their diet was beneficial, further studies are needed to determine celery’s specific role.

Celery’s fiber may help lower cholesterol levels because it picks up excess cholesterol compounds in your gut and pushes them out in the elimination process.

The research on the relationship between celery and cholesterol in humans is limited, but animal studies show promising results. A University of Chicago study described by The New York Times found that a chemical in celery called phthalide reduced bad cholesterol levels by 7 percent and blood pressure by 14 percent. Phthalide can lower stress hormones in the blood, allowing blood vessels to expand and relax and let more blood flow through the body. Another study, published in Pharmacognosy Magazine, looked at celery seed extract in rats. It concluded that the celery was helpful in lowering LDL (bad) cholesterol, triglycerides, and increasing HDL (good cholesterol). One study done on humans, published in Natural Medicine Journal, looked at celery seed extract given to mild-to-moderate hypertensive patients for six weeks and saw reduced blood pressure.

Fiber is well known for its digestive benefits. It helps keep your bowel movements regular, thereby reducing constipation; helps keep your bowels healthy, and aids in weight maintenance, according to the Mayo Clinic. One cup of celery provides about 6 percent of your daily fiber needs.

Some recent research suggests that the antioxidants in celery could also help improve stomach lining and reduce the risk of gastric ulcers. A study published in Pharmaceutical Biology found that laboratory rats consuming celery extract had fewer ulcers and more protected stomach linings. It is hypothesized that this success was caused by the apiuman, a pectin-based polysaccharide found in celery.

Furthermore, the University of Maryland Medical Center suggests eating celery to possibly reduce the risk of gastritis (inflammation of the stomach lining) because the vegetable’s flavonoids may help stop the growth of unwanted gut bacteria that causes inflammation.

The research is not definitive, but antioxidants, flavonoids and phytonutrients are sometimes associated with reduced cancer risk. Some recent studies have looked at celery’s flavonoids apigenin and luteolin. A study published in Molecular Nutrition & Food Research looked at apigenin in regard to the formation of pancreatic tumors, finding apigenin to be “protective.” Another study published in Food and Chemical Toxicology looked at both apigenin and luteolin. It, too, showed positive results, with the pancreatic cancer cells dying. Another study found similar results regarding apigenin and breast cancer cells.

In recent years, celery has gotten buzz for its purported arousing benefits. Celery contains high levels of androstenone and androstenol, which are male pheromones. According to Alan R. Hirsh, author of Scentsational Sex: The Secret to Using Aroma for Arousel, eating celery should increase men’s attractiveness, but the National Institutes of Health disagrees, noting, “It does not follow that simply because these compounds are found in body fluids or axillae that they communicate meaningful social information or influence reproductive processes in humans.” In fact, the Social Issues Research Centre of the United Kingdom reports that androstenol produced by male sweat is attractive to females, but that androstenone is not.

With 88 milligrams of sodium per cup, celery has a fairly high salt content for a vegetable. This causes some people watching their salt to worry about eating it, but according to Vicky Ferguson, a Michigan dietician, this doesn’t make celery a high-sodium food and one that the salt-aware need to worry much about.

Other risks of eating large amounts of celery include malnutrition and gastrointestional problems, according to LiveStrong.com. Dieters should be careful not to overdo it on celery because it is so low-calorie and could lead to malnutrition. And while fiber is great for you, too much can cause bloating, gas and diarrhea.

According to SF Gate, if eaten in very large, continuous, uncooked quantities, celery could potentially cause goiters. This is because great amounts of uncooked celery can interfere with the process of iodine functioning in the thyroid. Goiters can cause swelling in the neck, leading to breathing problems and possible hypothyroidism.

Celery contains chemicals called psoralens, which, if directly applied to the skin, causes it to become temporarily highly sensitive to ultraviolet light, according to Baylor University Medical Proceedings. This means that if you get celery juice on your skin and go into the sun, you could get a rash. The rash, which may burn, will appear within 12 to 36 hours and last for three to five days, though hyperpigmentation (darker skin) could last longer. This is mostly a problem for those who work in celery fields.

Celery is known for being exposed to a lot of pesticides. For years, it has appeared on the Environmental Working Group’s Dirty Dozen list of produce with the most pesticides. Be sure to wash your celery thoroughly, or buy organic if you can.

According to Love Celery, a British website that promotes celery: