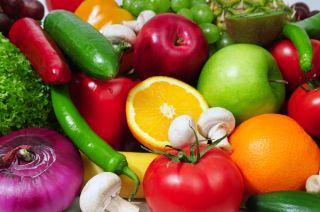 Flavonoids are plant compounds that are found in almost all fruits and vegetables.
(Image: © Fruits & vegetables photo via Shutterstock)

In recent years, scientists have turned to various flavonoids to explain some of the health benefits associated with diets rich in fruits and vegetables, according to the Linus Pauling Institute. Like other phytonutrients, flavonoids are powerful antioxidants with anti-inflammatory and immune system benefits. Diets rich in flavonoid-containing foods are sometimes associated with cancer, neurodegenerative and cardiovascular disease prevention. However, it is not yet clear whether the flavonoids themselves are responsible.

Onions, tea, strawberries, kale, grapes, Brussels sprouts, citrus fruit, parsley, and many spices are just a few natural foods rich in flavonoids, according to Louis Premkumar, a professor of pharmacology at Southern Illinois University School of Medicine and author of "Fascinating Facts about Phytonutrients in Spices and Healthy Food" (Xlibris, 2014).

Flavonoids are part of the polyphenol class of phytonutrients. Polyphenols have historically been used in Chinese and Ayurvedic medicine, according to the Global Healing Center, and they are associated with skin protection, brain function, blood sugar and blood pressure regulation, in addition to antioxidant and anti-inflammatory activity.

There are several significant groups of flavonoids, including anthocyanidins, flavanols, flavones, flavonols, flavonones and isoflavones. Within the flavanol subgroup there are still more subgroups. Each of these subgroups and each type of flavonoid carries its own distinct set of actions, benefits and originating foods.

Premkumar provided an overview of some flavonoid groups, where they can be found, and their benefits:

Flavones: These include luteolin and apigenin. Good sources of flavones are celery, parsley, various herbs and hot peppers. Flavones are associated with overall antioxidant benefits and delaying the metabolizing of drugs.

Anthocyanidins: These include malvidin, pelargondin, peoidin and cyanidin. Good sources of anthocyanidins include red, purple and blue berries; pomegranates; plums; red wine; and red and purple grapes. Anthocyanidins are associated with heart health, antioxidant effects and helping with obesity and diabetes prevention.

Flavonones: These include hesperetin, eriodictyol and naringenin. Flavonones are found abundantly in citrus fruits. They are associated with cardiovascular health, relaxation and overall antioxidant and anti-inflammatory activity.

Isoflavones: This subgroup includes genistein, glycitein and daidzein. Isoflavones are highly concentrated in soybeans and soy products, as well as legumes. They are phytoestrogens, meaning that they are chemicals that act like the hormone estrogen. Scientists suspect they may be beneficial in lowering the risk of hormonal cancers, such as breast, endometrial and prostate cancers, though study results are currently mixed. In various studies, isoflavones have sometimes acted as antioxidants and sometimes as oxidants, so their effect on cancer is unclear. They are also being studied as a way to treat menopausal symptoms.

Flavonols: This widely distributed subgroup of flavonoids includes quercetin and kaempferol. They are found in onions, leeks, Brussels sprouts, kale, broccoli, tea, berries, beans and apples. Quercetin is an antihistamine associated with helping to relieve hay fever and hives. It is also known for its anti-inflammatory benefits. Kaempferol and other flavonols are associated with powerful anti-inflamatory and antioxidant activities leading to chronic disease prevention.

Flavanols: There are three primary types of flavanols: monomers (more widely known as catechins), dimers and polymers. Flavanols are found in teas, cocoa, grapes, apples, berries, fava beans and red wine. Catechins are especially common in green and white teas, while dimers, which are associated with lowering cholesterol, are found in black tea. Scientists suspect catechins might be useful in aiding chronic fatigue syndrome symptoms. Catechins are also associated with cardiovascular and neurological health.

A large-scale, 25-year study, published in 1995 in the journal Archives of Internal Medicine, looked at men across seven countries and found that flavonoid consumption was significantly associated with longevity. The researchers suggested flavonoid consumption could account for 25 percent of the observed difference in mortality rates from coronary heart disease and cancer.

Premkumar noted that flavonoids are also associated with inflammation and weight loss. “Flavonoid content can relieve inflammation and decrease the levels of an appetite-suppressing hormone, leptin,” he said. “We know for sure that leptin plays an important role in food consumption because mice with mutations in leptin or its receptor become obese, and these animals are used as models for studying diabetes and obesity.”

Because of their antioxidant and anti-inflammatory behaviors, flavonoids are associated with cardiovascular disease prevention. According to the George Mateljan Foundation’s World’s Healthiest Foods website, flavonoids may lower the risk of atherosclerosis through protecting LDL cholesterol from free radical damage. They may also improve the quality of blood vessel walls.

Several studies have found an association between higher flavonoid intake levels and lowered cardiovascular disease risk across various groups, including postmenopausal women, male smokers and middle-age men and women. For example, a study of more than 10,000 men and women published in 2002 in the American Journal of Clinical Nutrition found that those with higher levels of quercetin had lower rates of ischemic heart disease and those with higher levels of kaempferol, naringenin and hesperetin had lower cerebrovascular disease rates.

Various flavonoids, including quercetin, have shown to be effective at preventing platelet aggregation, according to the Linus Pauling Institute. Platelet aggregation is a known component in heart disease because it contributes to forming blood clots that can lead to strokes and other problems.

A study published in 2013 in the journal Diabetic Medicine found that among men with type 2 diabetes, adding a flavonoid-rich spice mix to hamburger meat significantly improved their vascular function during subsequent hours. The spice mix included rosemary, garlic, ginger, black pepper and oregano — all spices that contain flavonoids. World’s Healthiest Foods notes that similar effects have been seen in studies of grape juice, chocolate, pomegranate juice and soy foods.

The research in this area has produced mixed results. Animal studies have shown positive results when it comes to lung, mouth, stomach, colon, skin and other cancers, according to the Linus Pauling Institute, but human studies have yet to show consistently similar results. More research is needed.

The most promising studies to date regard breast and stomach cancer. A large study published in 2003 in the British Journal of Cancer found that women with higher levels of flavone intake were at a lower risk for developing breast cancer, while a study in Cancer Causes & Control found a correlation between kaempferol intakes and reduced gastric cancer risk. On the other hand, another study, published in the same journal, did not associate reduced gastric cancer risk with kaempferol but flavonones.

Though flavonoids exhibit powerful antioxidant activity, they exist in a relatively low concentration in the bloodstream when compared to antioxidants like vitamin C and vitamin E, according to World’s Healthiest Foods. This may lower their overall antioxidant power, and thus lessen their cancer-fighting effects.

Flavonoids’ anti-inflammatory and antioxidant effects may help protect against neurodegenerative diseases like Alzheimer’s and Parkinson’s. In animal studies, flavonoid levels have been positively correlated with reduced risk of these diseases, but human studies have yielded inconclusive results. For example, a large-scale study published in 2000 in the European Journal of Epidemiology found that among elderly men and women, those with the highest levels of flavonoids had a 50 percent lower risk of developing dementia over the next five years than those with the lowest levels of flavonoid intake. On the other hand, a study published in 2002 in JAMA found that among men, the only group that saw a reduced risk of Alzheimer’s when increasing their flavonoid intake was smokers. The same results were seen in terms of Parkinson’s disease, according to a study published in 1997 in Archives of Neurology.

Flavonoids may also increase blood flow to the brain, improving cognitive function, according to World’s Healthiest Foods. A study published in 2007 in the American Journal of Epidemiologyfound that elderly men and women with higher flavonoid intake had better cognitive performance at the start of the study and significantly less age-related cognitive decline over the next 10 years than those with lower flavonoid intake.

Many types of flavonoids are available in supplement form. While these may be a good option for those struggling to get sufficient fruits and vegetables in their diet, the Linus Pauling Institute notes that quercetin supplements and tea extracts may cause side effects such as nausea, vomiting, tremors and dizziness. There are no side effects of consuming flavonoids through plant-based foods.

People who hope to consume flavonoids through plant-based foods should be aware that cooking and storing could change the flavonoid make up in fruits and vegetables. For example, onions stored at room temperature can lose up to one-third of their flavonoids in just two weeks. According to World’s Healthiest Foods, up to 80 percent of some flavonoids can be lost in the cooking process. A good way to tell if your food is losing nutrients is by its color; if its normally vivid colors start to fade while being boiled or cooked, your food is losing its phytonutrients.

Premkumar noted that flavonoids are often concentrated in the skins and outer areas of fruits and vegetables. For that reason, it is better not to cut up fruit, which damages the skin, until you are ready to eat it.