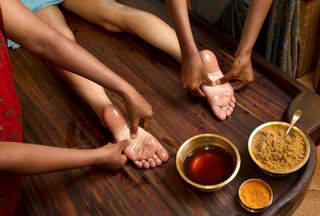 Ayurveda is an ancient health care tradition that has been practiced in India for at least 5,000 years. The word comes from the Sanskrit terms ayur (life) and veda (knowledge).

Though Ayurveda, or Ayurvedic medicine, was documented in the sacred historical texts known as the Vedas many centuries ago, Ayurveda has evolved over the years and is now integrated with other traditional practices, including yoga.

Ayurveda is widely practiced on the Indian subcontinent — more than 90 percent of Indians use some form of Ayurvedic medicine, according to the University of Minnesota's Center for Spirituality & Healing — and the tradition has gained popularity in the Western world, though it's still considered an alternative medical treatment.

Health care is a highly individualized practice under Ayurvedic principles, which state that everyone has a specific constitution, or prakruti, that determines his or her physical, physiologic and mental character and disease vulnerability, according to Dr. Bala Manyam, a neurologist and professor emeritus at Southern Illinois University School of Medicine.

Prakruti is determined by three "bodily energies" called doshas, Manyam told Live Science. There are three basic doshas, and though everyone has some features of each, most people have one or two that predominate, according to the University of Maryland Medical Center:

Pitta energy is linked to fire, and is thought to control the digestive and endocrine systems. People with pitta energy are considered fiery in temperament, intelligent and fast-paced. When pitta energy is out of balance, ulcers, inflammation, digestive problems, anger, heartburn and arthritis can result.

Vata energy is associated with air and space, and is linked to bodily movement, including breathing and blood circulation. Vata energy is said to predominate in people who are lively, creative, original thinkers. When out-of-balance, vata types can endure joint pain, constipation, dry skin, anxiety and other ailments.

Kapha energy, linked to earth and water, is believed to control growth and strength, and is associated with the chest, torso and back. Kapha types are considered strong and solid in constitution, and generally calm in nature. But obesity, diabetes, sinus problems, insecurity and gallbladder issues can result when kapha energy is out of balance, according to Ayurvedic practitioners.

According to Ayurvedic beliefs, factors such as stress, unhealthy diet, weather and strained relationships can all influence the balance that exists between a person's doshas. These unbalanced energies in turn leave individuals more susceptible to disease, according to the University of Maryland Medical Center.

Some researchers who study Ayurveda believe that understanding a patient's doshas — and in turn his or her prakruti — can help determine that patient's risk of developing certain diseases or health conditions. In a study published in 2013 in the Journal of Alternative and Complementary Medicine, Manyam used the principles of Ayurvedic medicine to identify populations that may be at higher risk of developing Parkinson's disease. The study found that the incidence of Parkinson's disease was highest in those with a vata prakruti (those whose dominant dosha is vata).

Such studies can be helpful not only in identifying vulnerable populations for diseases but also in delaying the onset of symptoms and slowing the progression of the disease, according to Manyam. In the case of patients with Parkinson's disease, individuals with a vata prakruti may alter their diet or seek Ayurvedic treatments that will keep their doshas in balance, Manyam said.

Disturbances in any of the three major doshas are addressed by a range of Ayurvedic treatments, including herbal remedies, dietary restrictions, yoga, massage, meditation and breathing exercises called pranayama, according to the University of Maryland Medical Center.

The effectiveness of these therapies has not been widely studied in clinical trials by practitioners of Western medicine. Therefore, some doctors and other health care professionals consider Ayurveda a risky adjunct to conventional medicine.

However, in the 1970s, the World Health Organization (WHO) conducted a study in conjunction with the Ayurvedic Trust — a public charitable health care organization in India — to test the effectiveness of Ayurvedic treatments in patients with rheumatoid arthritis. The study found that such treatments were both safe and effective, providing symptomatic relief of arthritis with no harmful side effects.

Organizations such as the Ayurvedic Trust are now endeavoring to back up claims about the efficacy of Ayurvedic treatments with peer-reviewed studies and articles, which are published in the organization's two journals, Ancient Science of Life (ASL) and ASL-Musculoskeletal Diseases.

"The fundamental concept of Ayurveda is to maintain health. Ayurveda does not look at the disease. It looks at the host and [an individual's] vulnerability," Manyam said.

Many Ayurvedic treatments — like meditation and individualized diets — are therefore aimed at keeping a person healthy, not curing them of disease.

Turmeric, a spice derived from the turmeric plant (Curcuma longa), is often prescribed by Ayurvedic practitioners. Turmeric contains beta-carotene, calcium, flavonoids, iron, niacin, potassium, zinc and other nutrients. And in addition to its potential effectiveness in treating peptic ulcers and some forms of cancer, turmeric also has proven anti-inflammatory properties. Several studies have suggested that it may help reduce the symptoms of rheumatoid arthritis, according to the National Center for Complementary and Alternative Medicine (NCCAM), a division of the National Institutes of Health (NIH).

A 2011 study found that an Ayurvedic herbal compound was just as effective at treating rheumatoid arthritis symptoms as Trexall (methotrexate).

Another widely used Ayurvedic treatment is frankincense, a dried resin derived from the Boswellia tree. According to NCCAM, osteoarthritis patients had significant decreases in pain after using a frankincense remedy.

A study published in 2005 in the journal Cardiology in Review suggested that the Ayurvedic practice of yoga may help reduce anxiety and improve quality of life, making it a beneficial practice for those with heart disease and hypertension.

A 2008 study published in the Journal of the American Medical Association (JAMA) found that almost 21 percent of Ayurvedic medicines purchased over the Internet contained detectable levels of lead, mercury or arsenic.

However, as Manyam pointed out, the medicines mentioned in the 2008 JAMA study were not linked to a widespread epidemic of poisoning in those who consume Ayurvedic medicine.

"Ayurvedic drugs have been taken for thousands of years, mostly in India, and if the lead in [these medicines] was poisonous, we should have an epidemic of lead poisoning. But we never had anything like that," Manyam said.

In 2012, the Morbidity and Mortality Weekly Report from the Centers for Disease Control and Prevention (CDC) noted six cases of lead poisoning in pregnant women who had used Ayurvedic medicines containing lead. (Fetal exposure to lead can cause severe problems with neurological development and other prenatal health concerns.)

If you're considering an Ayurvedic treatment, or any other alternative therapies, be sure to speak with your primary care physician or other health care professional. Some Ayurvedic treatments may be dangerous when combined with prescription or over-the-counter medicines.