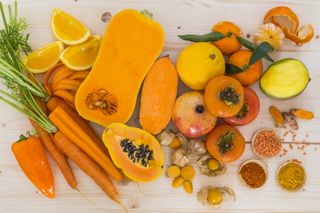 Foods that are high in beta-carotene, a form of vitamin A, include squash, carrots, grapefruit, oranges and apricots.
(Image: © Luke SW | Shutterstock)

Vitamin A is a fat-soluble vitamin that is good for healthy vision, skin, bones and other tissues in the body. Vitamin A often works as an antioxidant, fighting cell damage, but it also has many other uses.

“Through its role with cell growth and division, vitamin A has an important role in the normal formation and maintenance of the heart, lungs, kidneys and other vital organs,” Dr. Sherry Ross, women’s health expert at Providence Saint John’s Health Center in Santa Monica, California, told Live Science.

There are two types of vitamin A. Preformed vitamin A, also called retinol, is found in animal products. Good sources are fortified milk, eggs, meat, cheese, liver, halibut fish oil, cream and kidneys. Pro-vitamin A is found in plant-based foods such as fruits and vegetables, according to the U.S. National Library of Medicine (NLM). The most common type of pro-vitamin A is beta-carotene, a carotenoid that produces dark pigments in plant foods. Beta-carotene can be found in these brightly colored foods:

Vitamin A has many varied functions. Retinol not only creates the pigments in the retina of the eye, according to NLM, but also is integral for good vision, especially night vision, and overall eye health. An age-related eye disease study by the National Eye Institute found that taking high levels of antioxidants, such as vitamin A, along with zinc, may reduce the risk of developing advanced age-related macular degeneration by about 25 percent. Age-related macular degeneration is the most common cause of loss of vision in the older population, said Ross.

Vitamin A also helps skin grow and repair skin. “This being the case, it is the active ingredient in most Retin-A type products out today,” said Dr. David Greuner, director and co-founder of NYC Surgical Associates. Retin-A is a brand name for tretonin, a prescription medication that treats acne and other skin conditions. "It works by signaling to the cells to grow at a faster rate, bringing fresher, more youthful skin to the surface more rapidly. Used in excess, it can be quite irritating, however."

Other functions of vitamin A include the formation and maintenance of teeth, bones, soft tissue, white blood cells, the immune system and mucus membranes. Beta-carotene also acts as an antioxidant, protecting cells from free radical damage. Though many antioxidants prevent cancer, there is no evidence that beta-carotene supplements are helpful in the prevention of cancer, according to the National Cancer Institute. On the other hand, all-natural beta-carotene that can be consumed through vegetables and fruits has been found to helpful in preventing cancer in many studies.

Vitamin A deficiency is rare in the United States, although it is common in many developing countries. “In fact, Vitamin A deficiency is the leading cause of childhood blindness in Southeast Asia," said Greuner. Around 250,000 to 500,000 children around the world with vitamin A deficiency become blind every year. Half of those children die within 12 months of losing their sight, according to the World Health Organization. Symptoms of a severe deficiency are night blindness, dry eyes, diarrhea and skin problems.

Vitamin A dosage is tricky. Too little can make a person more susceptible to disease and vision problems while too much can create many problems, as well. The recommended dietary intakes for vitamin A depend on age, gender and reproductive status. The Dietary Reference Intakes (DRI) for adult women is 700 micrograms (mcg) and for adult men it is 900 mcg per day, according to the University of Maryland Medical Center. Doses over 25,000 international units (IU) per day should be avoided as they are likely to cause side effects, according to the NLM. One IU is the biological equivalent of 0.3 mcg retinol, or of 0.6 mcg beta-carotene, according to the National Institute of Health. For comparison, a baked sweet potato (half a cup) has 19,218 IU of vitamin A, according to the U.S. Department of Agriculture. A medium cantaloupe has 18,668 IU and a carrot (half a cup, chopped) has 10,692 IU.

“Overdose of Vitamin A is absolutely a plausible scenario given its fat soluble nature, and it has been associated with a diverse set of symptoms ranging from skin and hair loss to neurologic problems, to gastrointestinal complains. In addition, liver injury has been described in situations of long term excess,” said Greuner.