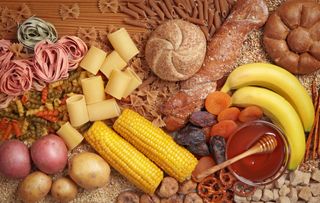 Carbohydrates are the sugars, starches and fibers found in fruits, grains, vegetables and milk products. Though often maligned in trendy diets, carbohydrates — one of the basic food groups — are important to a healthy diet.

"Carbohydrates are macronutrients, meaning they are one of the three main ways the body obtains energy, or calories," said Paige Smathers, a Utah-based registered dietitian. The American Diabetes Association notes that carbohydrates are the body's main source of energy. They are called carbohydrates because, at the chemical level, they contain carbon, hydrogen and oxygen.

The recommended daily amount (RDA) of carbs for adults is 135 grams, according to the National Institutes of Health (NIH); however, the NIH also recommends that everyone should have his or her own carbohydrate goal. Carb intake for most people should be between 45% and 65% of total calories. One gram of carbohydrates equals about 4 calories, so a diet of 1,800 calories per day would equal about 202 grams on the low end and 292 grams of carbs on the high end. However, people with diabetes should not eat more than 200 grams of carbs per day, while pregnant women need at least 175 grams.

Carbohydrates provide fuel for the central nervous system and energy for working muscles. They also prevent protein from being used as an energy source and enable fat metabolism, according to Iowa State University.

Also, "carbohydrates are important for brain function," Smathers said. They are an influence on "mood, memory, etc., as well as a quick energy source." In fact, the RDA of carbohydrates is based on the amount of carbs the brain needs to function.

Two recent studies published in the journal Proceedings of the National Academy of Sciences have also linked carbs to decision-making. In the studies, people who ate a high-carbohydrate breakfast were less willing to share when playing the "ultimatum game" than those who ate high-protein breakfasts. Scientists speculate this may be caused by baseline dopamine levels, which are higher after eating carbohydrates. This doesn't mean carbs make you mean, but underscores how different types of food intake can affect cognition and behavior.

Carbohydrates are classified as simple or complex, Smathers said. The difference between the two forms is the chemical structure and how quickly the sugar is absorbed and digested. Generally speaking, simple carbs are digested and absorbed more quickly and easily than complex carbs, according to the NIH.

Simple carbs are also in candy, soda and syrups. However, these foods are made with processed and refined sugars and do not have vitamins, minerals or fiber. They are called "empty calories" and can lead to weight gain, according to the NIH.

Complex carbohydrates (polysaccharides) have three or more sugars. They are often referred to as starchy foods and include beans, peas, lentils, peanuts, potatoes, corn, parsnips, whole-grain breads and cereals.

Smathers pointed out that, while all carbohydrates function as relatively quick energy sources, simple carbs cause bursts of energy much more quickly than complex carbs because of the quicker rate at which they are digested and absorbed. Simple carbs can lead to spikes in blood sugar levels and sugar highs, while complex carbs provide more sustained energy.

Studies have shown that replacing saturated fats with simple carbs, such as those in many processed foods, is associated with an increased risk of heart disease and type 2 diabetes.

Smathers offered the following advice: "It's best to focus on getting primarily complex carbs in your diet, including whole grains and vegetables."

In the body, carbs break down into smaller units of sugar, such as glucose and fructose, according to Iowa State University. The small intestine absorbs these smaller units, which then enter the bloodstream and travel to the liver. The liver converts all of these sugars into glucose, which is carried through the bloodstream — accompanied by insulin — and converted into energy for basic body functioning and physical activity.

If the glucose is not immediately needed for energy, the body can store up to 2,000 calories of it in the liver and skeletal muscles in the form of glycogen, according to Iowa State University. Once glycogen stores are full, carbs are stored as fat. If you have insufficient carbohydrate intake or stores, the body will consume protein for fuel. This is problematic because the body needs protein to make muscles. Using protein instead of carbohydrates for fuel also puts stress on the kidneys, leading to the passage of painful byproducts in the urine.

Fiber is essential to digestion. Fibers promote healthy bowel movements and decrease the risk of chronic diseases such as coronary heart disease and diabetes, according to the U.S. Department of Agriculture. However, unlike sugars and starches, fibers are not absorbed in the small intestine and are not converted to glucose. Instead, they pass into the large intestine relatively intact, where they are converted to hydrogen and carbon dioxide and fatty acids. The Institute of Medicine recommends that people consume 14 grams of fiber for every 1,000 calories. Sources of fiber include fruits, grains and vegetables, especially legumes.

Carbohydrates are found in foods you know are good for you (vegetables) and ones you know are not (doughnuts). This has led to the idea that some carbs are "good" and some are "bad." According to Healthy Geezer Fred Cicetti, carbs commonly considered bad include pastries, sodas, highly processed foods, white rice, white bread and other white-flour foods. These are foods with simple carbs. Bad carbs rarely have any nutritional value.

Carbs usually considered good are complex carbs, such as whole grains, fruits, vegetables, beans and legumes. These are not only processed more slowly, but they also contain a bounty of other nutrients.

The Pritikin Longevity Center offers this checklist for determining if a carbohydrate is "good" or "bad."

Recently, nutritionists have said that it's not the type of carbohydrate, but rather the carb's glycemic index, that's important. The glycemic index measures how quickly and how much a carbohydrate raises blood sugar.

On the other hand, recent research suggests that following a low-glycemic diet may not actually be helpful. A 2014 study published in JAMA found that overweight adults eating a balanced diet did not see much additional improvement on a low-calorie, low-glycemic index diet. Scientists measured insulin sensitivity, systolic blood pressure, LDL cholesterol and HDL cholesterol and saw that the low-glycemic diet did not improve them. It did lower triglycerides.

The right kind of carbs can be incredibly good for you. Not only are they necessary for your health, but they carry a variety of added benefits.

Carbohydrates may be important to mental health. A study published in 2009 in the journal JAMA Internal Medicine found that people on a high-fat, low-carb diet for a year had more anxiety, depression and anger than people on a low-fat, high-carb diet. Scientists suspect that carbohydrates help with the production of serotonin in the brain.

Carbs may help memory, too. A 2008 study at Tufts University had overweight women cut carbs entirely from their diets for one week. Then, they tested the women's cognitive skills, visual attention and spatial memory. The women on no-carb diets did worse than overweight women on low-calorie diets that contained a healthy amount of carbohydrates.

Though carbs are often blamed for weight gain, the right kind of carbs can actually help you lose and maintain a healthy weight. This happens because many good carbohydrates, especially whole grains and vegetables with skin, contain fiber. It is difficult to get sufficient fiber on a low-carb diet. Dietary fiber helps you to feel full, and generally comes in relatively low-calorie foods.

A study published in the Journal of Nutrition in 2009 followed middle-age women for 20 months and found that participants who ate more fiber lost weight, while those who decreased their fiber intake gained weight. Another recent study linked fat loss with low-fat diets, not low-carb ones.

While some studies have found that low-carb diets do help people lose weight, a meta analysis conducted in 2015 and published in The Lancet found that when viewed long term, low-fat and low-carb diets had similar success rates. People lost more weight early on while on low-carb diets but after a year they were all in similar places.

Whole, unprocessed fruits and vegetables are well known for their nutrient content. Some are even considered superfoods because of it — and all of these leafy greens, bright sweet potatoes, juicy berries, tangy citruses and crunchy apples contain carbs.

One important, plentiful source of good carbs is whole grains. A large study published in 2010 in the Journal of the American Dietetic Association found that those eating the most whole grains had significantly higher amounts of fiber, energy and polyunsaturated fats, as well as all micronutrients (except vitamin B12 and sodium). An additional study, published in 2014 in the journal Critical Reviews in Food Science and Nutrition, found that whole grains contain antioxidants, which were previously thought to exist almost exclusively in fruits and vegetables.

Fiber also helps to lower cholesterol, said Kelly Toups, a registered dietitian with the Whole Grains Council. The digestive process requires bile acids, which are made partly with cholesterol. As your digestion improves, the liver pulls cholesterol from the blood to create more bile acid, thereby reducing the amount of LDL, the "bad" cholesterol.

Toups referenced a study in the American Journal of Clinical Nutrition that looked at the effect of whole grains on patients taking cholesterol-lowering medications called statins. Those who ate more than 16 grams of whole grains daily had lower bad-cholesterol levels than those who took the statins without eating the whole grains.

Not getting enough carbs can cause problems. Without sufficient fuel, the body gets no energy. Additionally, without sufficient glucose, the central nervous system suffers, which may cause dizziness or mental and physical weakness, according to Iowa State University. A deficiency of glucose, or low blood sugar, is called hypoglycemia.

If the body has insufficient carbohydrate intake or stores, it will consume protein for fuel. This is problematic because the body needs protein to make muscles. Using protein for fuel instead of carbohydrates also puts stress on the kidneys, leading to the passage of painful byproducts in the urine, according to the University of Cincinnati.

People who don't consume enough carbohydrates may also suffer from insufficient fiber, which can cause digestive problems and constipation.