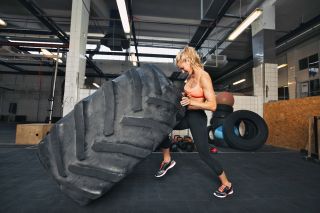 The human body has more than 600 muscles.
(Image: © Jacob Lund/Shutterstock)

While most people associate muscles with strength, they do more than assist in lifting heavy objects. The 650 muscles in the body not only support movement — controlling walking, talking, sitting, standing, eating and other daily functions that people consciously perform — but also help to maintain posture and circulate blood and other substances throughout the body, among other functions.

Muscles are often associated with activities of the legs, arms and other appendages, but muscles also produce more subtle movements, such as facial expressions, eye movements and respiration, according to the National Institutes of Health (NIH).

The muscular system can be broken down into three types of muscles: skeletal, smooth and cardiac, according to the NIH.

Skeletal muscles are the only voluntary muscle tissue in the human body and control every action that a person consciously performs. Most skeletal muscles are attached to two bones across a joint, so the muscle serves to move parts of those bones closer to each other, according to The Merck Manual.

Visceral, or smooth, muscle is found inside organs such as the stomach and intestines, as well as in blood vessels. It is called a smooth muscle because, unlike skeletal muscle, it does not have the banded appearance of skeletal or cardiac muscle. The weakest of all muscle tissues, visceral muscles contract to move substances through the organ, according to The Merck Manual.  Because visceral muscle is controlled by the unconscious part of the brain, it is known as involuntary muscle, as it cannot be controlled by the conscious mind.

Muscles are further classified by their shape, size and direction, according to the NIH. The deltoids, or shoulder muscles, have a triangular shape. The serratus muscle, which originates on the surface of the second to ninth ribs at the side of the chest, and runs along the entire anterior length of the scapula (shoulder blades), has a distinctive sawlike shape. The rhomboid major, which attaches the scapula to the spinal column, is a diamond shape.

The direction in which the muscle fibers run can be used to identify a muscle. In the abdominal region, there are several sets of wide, flat muscles, according to the NIH. The muscles whose fibers run straight up and down are the rectus abdominis, the ones running transversely (left to right) are the transverse abdominis and the ones running at an angle are the obliques. As any exercise enthusiast knows, obliques are among the hardest muscles to develop to achieve "six-pack" abs.

Muscles also can be identified by their function. The flexor group of the forearm flexes the wrist and the fingers. The supinator is a muscle that allows you to roll your wrist over to face palm up. Adductor muscles in the legs adduct, or pull together, the limbs, according to the NIH.

Diseases of the muscular system

There is no single type of doctor that treats muscular diseases and disorders. Rheumatologists, orthopedists and neurologists may all treat conditions that affect the muscles, according to the American Medical Association.

There are a number of common neuromuscular disorders, according to Dr. Robert Schabbing, chief of neurology at Kaiser Permanente in Denver.

The most common neuromuscular junction disorder is myasthenia gravis, which is characterized by varying degrees of weakness of the skeletal muscles. Schabbing said. "There are many types of peripheral neuropathies that can be secondary to other medical conditions, such as diabetes, or due to a variety of other causes, including toxins, inflammation and hereditary causes," he said.

The most common symptom or sign of a muscle disorder is weakness, although muscle disorders can cause a number of symptoms, according to Schabbing. In addition to weakness, symptoms include abnormal fatigue with activity, as well as muscle spasms, cramping or twitching. Neuromuscular disorders affecting the eyes or mouth can cause drooping eyelids or double vision, slurred speech, difficulty swallowing or, sometimes, difficulty breathing.

Electromyography — commonly referred to as an EMG — is often used to diagnose muscular disorders. An EMG helps characterize causes of nerve and muscle disorders by stimulating nerves and recording responses, Schabbing noted. Rarely, nerve or muscle biopsies are needed.

Steroids and other medications can help to reduce spasms and cramping. Milder forms of chemotherapy can help treat many muscular disorders, according to Dr. Ricardo Roda, an assistant professor of neurology, neuroscience and physiology at NYU Langone Medical Center.

Human Body: An Illustrated Guide
Amazon
$9.99
View Deal
We check over 130 million products every day for the best prices