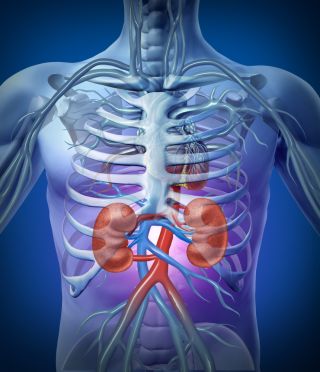 Kidneys are bean-shaped organs located on both sides of the spine, behind the stomach.
(Image: © Lightspring | Shutterstock)

Most people have two kidneys. They are bean-shaped organs located on both sides of the spine, behind the stomach. Each one is about the size of an adult fist. Their main purpose is to keep the composition of blood in the body balanced to maintain good health.

They aren’t just one big filtering sponge, though. Each kidney is a system of millions of tiny filters called nephrons. A nephron has two parts. The glomerulus is the first part of the filter. It strains blood cells and large molecules from the toxins and fluid. The fluids and toxins that pass through then go through the tubule. The tubule collects minerals that the body needs and puts them back into the bloodstream and filters out more toxins.

While filtering, the kidneys produce urine to carry the toxins away. The urine is sent through two tubes called ureters down to the bladder, where the urine then leaves the body through the urethra.

Poor kidney care and genetics can cause a wide range of health problems. Chronic kidney disease, also called chronic kidney failure, is when the kidneys slowly stop functioning. One in three American adults are at high risk for developing kidney disease, according to the National Kidney Foundation. There are many conditions that can cause kidney disease, including type 1 and 2 diabetes, high blood pressure, obstructions in the urinary tract and inflammation of various parts of the kidneys, according to the Mayo Clinic.

Kidney failure is the most severe stage of kidney disease. It occurs when kidneys stop functioning without help. People with kidney failure need dialysis or a kidney transplant to survive. People with healthy kidneys can donate part of a kidney or a whole kidney to those in need without becoming sick, in most cases. Kidney transplants are one of the most common surgeries in the United States, according to the U.S. National Library of Medicine.

Kidney stones are exactly what they sound like. They are stones made from hardened minerals and acid salts that collect in the kidneys, usually formed by concentrated urine. The minerals in the urine crystalize and stick together, according to the Mayo Clinic. Though they are very painful, they usually don’t cause any damage to the body.

Kidney infections, also called pyelonephritis, are usually caused by bacteria that enter the urethra, ascend into the bladder and make their way to the kidneys, according to the Urology Care Foundation. If a kidney infection goes untreated, it can cause permanent kidney damage.

Proper care can keep kidneys running properly well into old age. One of the most important things to remember is to stay hydrated. Kidneys need water to function properly and to carry away toxins.

“In the most serious cases, dehydration can eventually harm the body causing seizures, kidney failure and even death,” said Dr. Buck Parker, a trauma surgeon who also recently appeared on NBC’s reality TV show “The Island.” Parker suggested that the best ways to avoid dehydration included drinking water before you get thirsty, since thirst indicates dehydration; eating foods, like fruits and vegetables, with a high water content; avoiding soda or other caffeinated drinks; and limiting alcohol consumption.

Vitamins can be very important to the function and health of kidneys. “(Folic acid) helps to reduce levels of homocysteine, which has been linked to heart disease, stroke and kidney disease,” said Dr. Kristine Arthur, an internist at Orange Coast Memorial Medical Center in Fountain Valley, California. Vitamin A is also very important to healthy kidney function.

Taking too much vitamin C, though, may lead to kidney stones, according to Arthur.

Another supplement that may cause trouble is calcium. “Some older women who get their calcium from supplements rather than in their diet are more prone to kidney stones,” said Dr. Linda Girgis, a family practice doctor in South River, New Jersey. “Many people falsely assume that taking vitamins is healthy and safe, but this is not always the case. Sometimes people take too much. It is very hard to get too much when ingesting it is food,” said Girgis.

Human Body: An Illustrated Guide
Amazon
$14.79
View Deal
We check over 130 million products every day for the best prices

Related pages about the human body