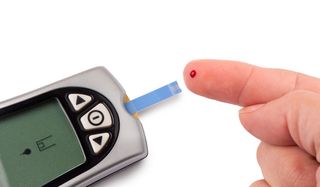 There are three types of diabetes: type 1 diabetes, type 2 diabetes and gestational diabetes. In all three cases, the pancreas either does not produce enough insulin, a hormone that regulates blood sugar, or the body's cells fail to respond to insulin's signals. Symptoms include frequent thirst and urination, fatigue and blurry vision and numbness in the hands and feet. About 29 million people in the United States, or 9.3 percent of the population, have diabetes, according to a 2012 report from the Centers for Disease Control and Prevention (CDC).

Another 86 million adults — more than one in three U.S. adults — have prediabetes, which means their blood sugar levels are higher than normal but not high enough to be considered as type 2 diabetes, according to the CDC. Up to 30 percent of people with prediabetes will develop type 2 diabetes within five years if they don't lose weight or engage in more exercising to manage their blood sugar levels, the CDC says.

A quarter of people with diabetes are unaware of their condition, according to the CDC. The reason is that symptoms of diabetes can be so mild that they go unnoticed. Most common symptoms of diabetes, according to the Mayo Clinic, include urinating often, feeling very thirsty or very hungry, extreme fatigue, blurry vision, unexplained weight loss (in type 1 diabetes), tingling or numbness in the hands or feet (in type 2 diabetes).

The first, type 1 diabetes, was once known as "juvenile diabetes" or "insulin-dependent diabetes mellitus." Type 1 diabetes is thought to be an autoimmune disorder. The body's immune system attacks the islet cells of the pancreas, which produce the blood-sugar-regulating hormone insulin. As a result, the pancreas stops producing insulin, or does not produce enough for the body's needs. About 5 percent of diabetes cases are Type 1 diabetes, which is usually diagnosed in childhood. [Read more about type 1 diabetes]

Researchers have yet to pinpoint why some people develop insulin resistance and others don't. Obesity and inactivity are contributing factors. Moreover, a gene passed to Homo sapiens from the extinct human Neanderthals might confer extra type 2 diabetes risk, according to research released in 2014.

Having diabetes can result in damage to the body tissues, including the heart and blood vessels. Two-thirds of people with diabetes will die of heart disease or stroke, according to the American Diabetes Association (ADA).

Diabetes can cause eye problems and may lead to blindness. People with diabetes are advised to undergo regular eye checkups, to prevent major eye problems.

Diabetes also carries a risk of other health problems ranging from skin problems to more serious problems such as damage to the arteries (peripheral arterial disease), which reduces blood flow to the feet. Another complication of diabetes is nerve damage, or diabetic neuropathy, which makes it hard for people with diabetes to notice injuries, blisters or ulcers, on their feet, that may lead to amputation. Thus, people with diabetes must take proper care of their feet and pay close attention to potential problems.

There are several tests for diabetes. One is that A1C blood test, which measures average blood glucose over the past three months. The test measures glucose attached to hemoglobin, the oxygen-carrying protein in blood. The red blood cells that carry this protein live about three months, so measuring them at a single time point gives a history of the amount of glucose in the blood. An A1C result of less than 5.7 percent is normal. An A1C between 5.7 percent and 6.4 percent means you are prediabetes. A result of 6.5 percent or greater indicates diabetes, according to the ADA.

A second test, the fasting plasma glucose test, requires the patient to fast for eight hours before having a blood glucose test. This test reveals how effectively the body metabolizes glucose. More than 126 milligrams of glucose per deciliter (mg/dl) of blood signals diabetes.

Another test, the oral glucose tolerance test, is often used for gestational diabetes screening. This test requires the patient to drink an extra-sugary drink. Two hours later, the person undergoes a blood test. More than 200 mg/dl of glucose in the blood is a red flag for diabetes.

People with diabetes need to regularly monitor their blood sugar levels. The treatment for type 1 diabetes is regular insulin injections, sometimes delivered with an insulin pump, a catheter device that automatically dispenses the hormone.

The first treatment for type 2 diabetes focuses on increasing physical activity and changing the diet to a healthy one that includes more fruits, vegetables and whole grains, and less refined carbohydrates and sweets, according to the Mayo Clinic. Some people can lower their blood sugar levels with diet and exercise alone, but others will also need insulin injections or diabetes drugs such as metformin.

Risk factors for type 2 diabetes include both biological factors and lifestyle factors that can be modified. Factors such as age, obesity of being overweight, having a family member who has diabetes, or being African American, American Indian, Asian American, Pacific Islander, or Hispanic American, increase the risk of developing diabetes, according to the CDC.

Women who have developed gestational diabetes during pregnancy are also more likely to develop diabetes later in life. Having high blood pressure or abnormal cholesterol and triglyceride levels are other risk factor for diabetes.

Lifestyle changes can lower a person's risk for diabetes, and is especially important for people who have pre-diabetes, according to the CDC. Studies have shown that even moderate weight loss and exercise can prevent or delay type 2 diabetes among people at high risk of developing the condition.