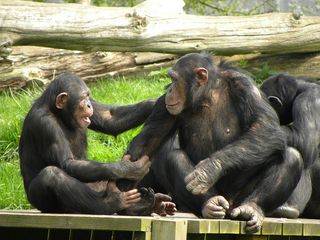 Chimps and humans have a similar sense of fairness, a new study shows.
(Image: © foshie | Flickr.com)

Humans aren't the only ones who cry "no fair." In a classic test of fairness called the ultimatum game, apes will dole out an equitable share of their bananas — and when they don't, their partners will complain, a new study shows.

The findings, published today (Jan. 14) in the Proceedings of the National Academy of Sciences, suggests that humans and chimpanzees may share an evolved sense of fairness common to many cooperative species, said lead study author Darby Proctor, a primatologist at Emory University.

"If you're involved in some cooperative act you need to be sure you're engaging in something that's beneficial to you," Proctor told LiveScience. "Comparing your rewards with others' seems like it would be really, really important."

In a classic economic trial called the ultimatum game, people are given $100 and can give some fraction of it to an anonymous partner they'll never see again. The recipients can reject the offer if they don't like it, in which case both people get nothing.

Rationally, the "smart" response would be to take any offer, no matter how low, but participants routinely reject offers lower than $10 or $20, said Manfred Milinski, an evolutionary biologist at the Max Planck Institute for Evolutionary Biology in Germany, who was not involved in the study. Most people offer around $40 to their partners and in some countries, people offer more than half of the money to partners, Milinski told LiveScience.

But past studies of the ultimatum game in chimpanzees (with raisins) had suggested our closest living relatives were "rational maximizers" who would accept even the stingiest offering without getting ruffled. They even accepted zero-raisin offers without even a squawk. That suggested their main goal — getting more tasty raisins — overrode any meager sense of fairness they may have had.

Those studies, however, instantly started a new round of the game if the apes accepted, but made them wait a full minute after rejecting the offer, raising the possibility that the apes realized it was more fruitful to accept quickly to get more raisins, rather than rejecting low-ball offers.

In the new study, the team trained the primates to dole out tokens that stood for bananas, with one token symbolizing an equal split, while the other was an unfair deal that benefitted the first chimp. [See a Video of Chimps' Ultimatum Game]

At first the chimps were stingy, but very quickly, they switched to offering equitable splits in the ultimatum game.

To test the method, the researchers had 3- to 5-year-old children participate in a similar experiment using stickers instead of bananas. The little ones started out greedy but quickly offered the tokens for fairer distributions of stickers. And those who got a raw deal complained.

"Their reactions struck me as very similar to the chimps," Proctor said. "They would say things like 'You got more stickers than me,' or 'I want more stickers.'"

"I am not surprised we are so similar to chimps. We are not unique," Milinski told LiveScience.