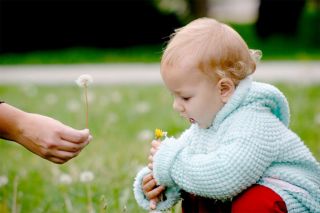 Even at 15 months, when they are just beginning to grasp language and acquaint themselves with their newfound motor skills, babies understand the concepts of sharing and fairness, suggests a new study.

The researchers also found that infants do have different sharing "personalities," with some being shocked by unfairness and others by equal sharing.

"These norms of fairness and altruism are more rapidly acquired than we thought," study researcher Jessica Sommerville, of the University of Washington, said in a statement. "These results also show a connection between fairness and altruism in infants, such that babies who were more sensitive to the fair distribution of food were also more likely to share their preferred toy."

Previous studies have revealed that 2-year-olds can help others — considered a measure of altruism — and at around age 6 or 7, they begin to display a sense of fairness. Previous research has also indicated that toddlers are able to understand altruism and react accordingly; they are more willing to help those who voluntarily share their toys.

To see when these sharing and fairness traits first begin to appear, the researchers showed 47 babies videos of an adult dividing crackers or milk between two other adults.

The researchers watched the babies' reactions to the videos for what's called a "violation of expectancy" — when babies are surprised by something, they tend to stare longer at it. On average, the babies watched the videos with the unequal sharing more intently, but some were more surprised than others.

The team also tested infants' willingness to share by presenting them with two toys and asking them to choose one. A researcher then approached the infant and asked, "Can I have one?"A third of the infants passed the researcher the toy they had chosen and a third passed the second toy. The remaining third didn't pass over any toy, which could mean they were unwilling to share, were nervous around a stranger, or didn't understand the task.

When the researchers compared the sharing results with the video-watching results, they found that the babies fell into one of three categories. The majority (92 percent) of babies who shared their preferred toy were also the ones who were shocked by unfairness in the videos and were named "altruistic sharers." Of the infants who shared their least favorite toy, 86 percent were also shocked by equal sharing in the video, called "selfish sharers."

"The altruistic sharers were really sensitive to the violation of fairness in the food task," Sommerville said. Fairness seems as though it might even be built into our brains; research published in the journal Nature in 2010 showed that our brain centers react to unfair allocation of monetary rewards.

Though fairness may be ingrained in even the youngest of infants, our ideas of fairness seem to change as we age. Previous research found that young children seem to like all things to be equal, but older adolescents are more likely to consider merit when it comes to dividing up the wealth, a study published in the journal Science in 2010 found. It could be due to brain changes and adaptation to social experiences.

Even our evolutionary kin, the great apes, understand fairness. Research published in 2010 in the journal Current Biology indicates that bonobos always share, while chimps are stingy. The chimps actually show a similar progression as humans as they grow older: Young chimps are more willing to share, while older animals are greedy, some even using violence to keep their food out of the hands of others.

The study was published Friday (Oct. 7) in the journal PLoS ONE.