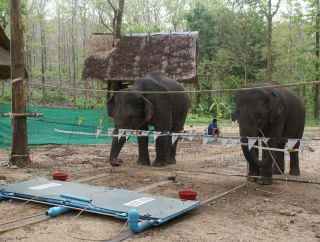 If the elephants didn't cooperated and both tug the rope at the same time, they missed out an a yummy corn snack.
(Image: © Joshua Plotnik and Richard Lair)

Elephants are widely regarded as possessing advanced brains, displaying levels of intelligence seen only in humans, dolphins, chimpanzees and others capable of higher forms of thinking. For instance, elephants recognize themselves in mirrors, learning that such reflections are images of themselves and not others, behavior apparently unique to species that show complex empathy and sociality.

Still, there is remarkably little research to see just how smart elephants are, due in large part to their daunting strength. Nevertheless, scientists have now adapted an experiment commonly used with primates to test elephants' understanding of cooperation and found they passed with flying colors.

"It's a great task originally designed for chimpanzees by a research group in Japan. It seems simple, but actually requires quite a bit of understanding," said researcher Joshua Plotnik, a comparative psychologist at the University of Cambridge in England and head of elephant research for the Golden Triangle Asian Elephant Foundation in Chiang Saen, Thailand.

The scientists worked with 12 Asian elephants at the Thai Elephant Conservation Center in Lampang, Thailand, in a task where the animals had to coordinate their efforts so that each could get a tasty bucket of corn. When a pair of elephants pulled two ends of the same rope simultaneously, a table bearing the corn slid within reach. However, if one end of rope was pulled before or without the other, the rope slipped from the table and the elephants got nothing.

These experiments aim to figure out what exactly animals understand about their partners and the requirements of cooperation.

[5 Animals With a Moral Compass]

"Cooperation itself isn't very unique — species from honeybees to lions cooperate in various ways, but what these animals 'understand' about how cooperation works is debatable," Plotnik added. "For many species, cooperation probably doesn't require much cognition at all, as much of the behavior is 'pre-programmed.'"

The pachyderms first learned to pull the table alone. They were then given a chance with a single rope threaded through and around the table to pull with a partner. The elephants quickly learned to coordinate their efforts.

"We found that elephants would wait at their rope end as long as 45 seconds — they understood that pulling without the partner wouldn't earn any reward," Plotnik said. "This is a very long time for an animal to inhibit their pulling when they know that good food is just out of reach."

The researchers also found that elephants would not pull the rope if their partner lacked access to the cord. Instead, they retreated away from the table.

"In the wild, elephants are known for remarkable displays of helping, empathy and compassion," Plotnik said. "They are a very social animal, so this demonstration of complex cooperation fits well with what we know about their natural lives."

Although such a task seems simple, it can prove difficult for many animals, Plotnik said. When tested in a similar manner, crows and their relatives, which research increasingly shows are extraordinarily intelligent, do not wait for their partner.

[The 5 Smartest Non-Primates on the Planet]

"This is the first study of elephant social behavior in a controlled setting," Plotnik told LiveScience. "As far as I know, neither dogs nor dolphins have been tested on this task, although there are some interesting results on hyenas, which seem to show some understanding of the need for partners in cooperation."

Intriguingly, two of the elephants devised different ways to solve this problem. One 5-year-old female elephant named Neua Un stepped on the rope to keep it from slipping away, forcing her partner to do all the work to retrieve the table. Another elephant, an 18-year-old male named JoJo, did not approach the rope and then wait for a partner as the others did, but instead waited for a partner and then approached the rope.

"Elephant behavior is flexible, meaning the elephants didn't simply employ the strategy on which they had been trained," Plotnik said. "Intelligent species must learn to adapt to their changing environments, solve problems, cooperate — all of this requires great flexibility in behavior."

How to study giant creatures

Working with elephants is both exciting and frustrating, Plotnik said.

"This work, from planning to completion, took a year and a half," he noted. "They are extremely intelligent and extremely powerful, so coming up with an apparatus that was both safe and robust was a challenge. One of the most important things when working with tame elephants is to seek advice from and collaboration with the elephant 'mahouts' — these guys live and breathe elephants, and they know elephant behavior better than anyone. Their insight helped us to construct a robust apparatus in a jungle-like environment that still fell within our requirements for a rigorous, controlled experiment."

"It is so hard and dangerous to work with elephants that there are almost no studies of their intelligence, such as those Josh has conducted in Thailand," said researcher Frans de Waal at Emory University. "We hardly knew what to expect. Would the animals pay attention to each other, and realize this is a cooperative task? But they did about as well as chimpanzees do in similar setups. No wonder elephants are widely regarded as among the smartest animals."

Many elephant organizations in Thailand are desperately trying to draw attention to the plight of the elephant, a species whose numbers in the wild are rapidly declining. Plotnik noted that there are probably fewer than 2,500 left in the Thai jungle. "As animal lovers," he said, "we are interested in bringing greater attention to conservation causes, and elephants are a huge one."

"Throughout Southeast Asia, there is human-elephant conflict that is a result of decreased natural habitat — the elephants then raid crops for food, creating a serious problem for the elephants and local farmers," Plotnik explained. "Greater attention is needed to understand elephant behavior so that a more comprehensive approach to protecting them can be developed that takes both the needs of the humans and the elephants into account."

The scientists detailed their findings online in today’s (March 7) journal Proceedings of the National Academy of Sciences.