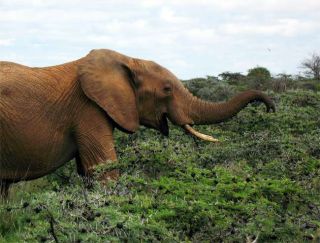 An elephant in the African savanna sniffs out the Acacia trees.
(Image: © Kathleen Rudolph.)

Ants in your pants? That's nothing compared with ants up your snout. And that's what elephants in the African savanna must contend with when trying to snag a meal from a certain type of acacia tree.

In fact, the pesky animals are keeping African elephants from devouring so-called Acacia drepanolobium trees as they have been to other tree species in the area, a new study suggests.

"Ants swarming onto an herbivore's face often tend to head for the sensitive parts such as the nostrils before hunkering down and taking a bite out of the offending animal," said study researcher Todd Palmer, a University of Florida biology professor. "While the outside of an elephant's trunk is very tough, the inside of the trunk is very sensitive and full of nerve endings. It seems that elephants simply do not like ants swarming up the insides of their trunks."

Palmer and his colleague Jacob Goheen, of the University of Wyoming, were conducting research in the central highlands of Kenya, where elephants have destroyed much of the tree cover. There, the A. drepanolobium trees appeared to be unscathed by the hungry giants.

That tree in particular has a cozy relationship with ants, which live on its branches full time. "The ants protect the tree in exchange for both housing that the tree produces in the form of bulbous hollow thorns, as well as food in the form of a sugary nectar that is secreted at the base of the leaves," Palmer said.

But the researchers weren't sure whether the elephants steered clear due to the ants or some other factor. So they set up an experiment at a wildlife orphanage, where they gave elephants a choice between the A. drepanolobium trees with and without ants on the branches, and their favorite food, Acacia mellifera, to which the researchers added ants to some of its otherwise ant-free branches.

Giraffes, gazelles and other savanna mammals seem to be oblivious to the ant swarms, a phenomenon the researchers say has everything to do with the length of the animals' noses.

Giraffes were blessed with relatively short noses and very long tongues. "So when ants begin to swarm towards a giraffe's nose, it appears to use its long, tough tongue to swipe them away before being bitten," Palmer said. "An elephant, on the other hand, has a very long 'nose,' which is its trunk. And it's that trunk it uses to feed, and so the trunk comes in contact with those swarms of biting ants."

"In contrast to the catastrophic damage that elephants wreak, however, these mammal species tend to either strip away leaves or nip the growing tips of trees, and so their damage to acacias is less severe," Palmer explained.

The results, which are detailed this week in the journal Current Biology, might have implications for how the savannas will fare as droughts become more frequent, which is predicted due to global warming.

"With more droughts, the extent to which elephants destroy and remove trees may increase and potentially shift the ecosystems back to grasslands," Palmer said, and so the ants' role in saving the trees could be critical.