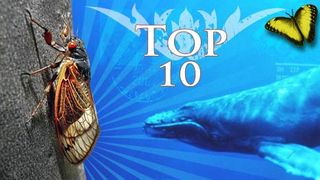 Animals will make extraordinary and often mysterious expeditions to find a good meal, sexy mates, and the perfect place to raise a family. In early spring every 17 years, billions of cicadas will burst out from their hiding places to complete one of the longer journeys in time, while moving only a few inches from burrow to daylight. Other migrations, like those of monarch butterflies and humpback whales, cover thousands of miles.

Billions of chubby, buzzing cicadas will surface from their underground bunkers this month to gather together, sing, and mate. The insects will have spent 17 years fattening up underground, growing through five stages of development. Their synchronized appearance overwhelms predators, leaving most of the reveling cicadas carefree to party for their five weeks of adult life.

In the Arctic tundra, over-population and a scarcity of food sends lemmings on mass migrations at high speeds. Researchers clocked one trek of the petite mammals at almost 10 miles a day. For the weak, the pace of the journey is just too much and they are left behind to die.

Greener pastures drive 1.5 million of these herbivores in circles. Serengeti wildebeest travel more than a thousand miles in spectacularly huge herds, along with thousands of Zebra and gazelle, to avoid the dry seasons in Tanzania and Kenya.

Motherly instinct compels female green turtles to return to their birthplace to start their own families. The pregnant turtles swim more than a thousand miles from their coastal feeding grounds in Brazil into the middle of the South Atlantic Ocean to Ascension Island. On the tiny nursery's sandy beach, the expectant mothers carve out nests and lay their eggs before heading back home.

After spending years swimming in the ocean, salmon follow their noses and return to the freshwater streams they were born in to spawn and eventually die. They'll swim upstream against strong currents for hundreds of miles to make the perfect homecoming, even if it means arriving in shoddy condition.

Before its 500-mile trip to Central America, the ruby-throated hummingbird bulks up on nectar, insects, and tree sap. The tiny bird gains 2 grams of fat, almost doubling its weight, to make the nonstop flight from eastern North America across the Gulf of Mexico.

Migrating long distances is in a monarch's blood. Each fall, thousands of butterflies head west in California and Mexico. They summer 3,000 miles away, throughout the United States and Canada. But how they know when and where to go continues to puzzle scientists.

Recovery efforts of the whooping crane have included flight lessons for the endangered snowbirds. Ultralight aircraft and radio-controlled robots disguised as cranes have lead hand-reared birds south to winter in protected areas.

Freshwater eels are born prepared for the rough waters they face in life. After hatching in the salty Sargasso Sea, the eels swim to freshwater rivers in the United Kingdom and the East Coast of North America. On the way, their kidneys adapt to the change in salinity. When it's time to lay eggs, the eels and their kidneys will return to their beginnings.

Humpback whales hold the world's record for longest mammalian voyage. One population spends the warmer months eating a literal ton of food a day in waters off the Arctic Peninsula. Come wintertime, they swim 5,000 miles away to balmy breeding grounds near Columbia and the Equator.