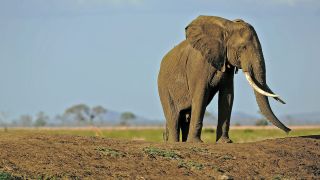 About 66 million years ago, an asteroid collided with Earth, wiping out the dinosaurs and giving a group of small terrestrial herbivores a tremendous evolutionary opportunity. With dinosaurs (except birds) out of the picture, an untold number of niches were suddenly available. Descendants of those mammals, which belong to a taxonomic group scientists call Paenungulata, spread across the world and evolved into some of the most well-known mammals — living and extinct — that have ever roamed Earth or swum its seas, Advait Jukar, a paleobiologist at the National Museum of Natural History at the Smithsonian in Washington, D.C., told Live Science. The most famous is the elephant.

Though some of these strange creatures look like the enormous, beloved beasts, you'd be shocked to learn that others are also related to the terrestrial giants of today. From the sea cow to the hyrax, here are seven surprising, long-lost relatives of elephants.

This four-legged mammal was closely related to manatees, dugongs and the recently extinct Steller's sea cow, but fossils indicate that the pezosiren wasn't as well suited to aquatic life as its relatives were. Paleontologists think this long-tailed guy, whose remains were unearthed in the country of Jamaica, existed for a short time between 40 million and 50 million years ago.

Pezosiren shared a distant ancestor with elephants, hyraxes and other sea cows. That long-lost creature evolved in Africa and found its way to the New World very early. Scientists hypothesize that an ancestral panungulate may have made the journey by floating across the Atlantic on large rafts of vegetation. Back then, the trip would have been shorter, as the ancient Atlantic was much narrower at that time than it is today.

Another descendant of the ancestral panungulate is the manatee (Trichechus), found today on both sides of the Atlantic. One species lives in West Africa and two live in the New World: one in the Amazon and the other in rivers and coastlines in Florida. All sea cows, including manatees, evolved from pig-like animals that moved from land into the sea, and the last ancestor they share with elephants lived about 60 million years ago.

Dugongs (Dugong dugon) are a marine sea cow and live in tropical waters, from the Red Sea to the coastlines of Australia and New Guinea. Like all panungulates, dugongs are herbivores that share subtle anatomical features, such as cheek bones that tend to flare out and certain characteristics of the bones in their inner ears.

Dugongs can grow up to 10 feet (3 meters) long and live for a whopping 70 years, according to National Geographic. Some historians believe that dugong sightings helped inspire the myth about mermaids and mermen.

The Steller's sea cow was a marine sea cow that lived in the Bering Sea until the 18th century, when Europeans hunted them into extinction. The naive creatures were 25 to 30 feet (7.6 to 9.1 m) in length, making them the largest of the sea cows and especially desirable for their meat. The herbivores would float to the surface to eat kelp, making them easy targets. Steller's sea cows were driven to extinction in less than 30 years after their discovery by Europeans.

Status: Went extinct about 4,000 years ago

The woolly mammoth is perhaps the most well-known extinct mammal, but the charismatic creature wasn't around for very long. As members of the family Elephantidae, woolly mammoths were themselves elephants. Their last common ancestor with modern-day elephants lived somewhere in Africa about 6 million years ago. Scientists think woolly mammoths evolved about 700,000 years ago from populations of steppe mammoths living in Siberia. Wooly mammoths were roaming Earth's northern latitudes during the construction of the Great Pyramid of Giza.

The last mammoths lived on islands off the coast of Alaska and Siberia and fell victim to human activity.

Columbian mammoths were giants that roamed North America in the Pleistocene. During a period of glaciation, sea levels dropped, allowing populations to spread onto Santa Rosa Island off the coast of California. The Columbian mammoths that ventured onto the island were stranded as the glaciers receded and sea levels rose once again. Scientists think that limited space and resources favored smaller individuals and eventually led to the creation of a new, much smaller species, called the pygmy mammoth.

Weighing less than a ton, the members of the new species were less than one-tenth the mass of their mainland ancestors.

Status: Least concern, near threatened (depending on species)

Hyraxes are small, furry mammals that more closely resemble rodents than elephants. Though their bodies are different in some ways, hyraxes share some important features with elephants, including certain dental characteristics, the arrangement of bones in their wrists and ankles, and the absence of external testicles. Though there were once many species, only five survive today.

Hyraxes are native to Africa and southwestern Asia. They typically spend their morning hours sunbathing and chowing down with their families on grasses, leaves, fruits, insects, lizards and bird eggs, according to the African Wildlife Foundation. They even have designated potties — that is, latrines where the whole family does its bathroom business.

Fossils suggest this two-horned creature lived in swamps in Africa and Asia about 56 million to 23 million years ago. Fossils discovered in 2008 suggest that Arsinoitherium was able to travel between the African continent and the Arabian Peninsula. Scientists have known for a long time that the species wasn’t closely related to the rhinoceros, but until recently paleobiologists believed that Arsinoitherium was a member of Paenungulata. Recent research has led researchers to think that it is less closely related to elephants than the other animals in this presentation.