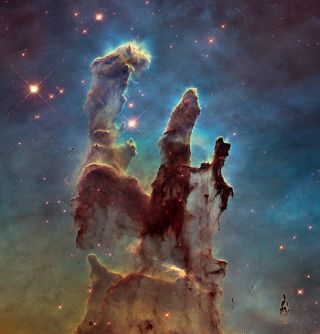 The Pillars of Creation are towering formations of cosmic gas and dust that lie in the center of the Eagle Nebula. A research team in Japan just discovered towering Giant Elephant Trunks that are much larger than these pillars.
(Image: © NASA, ESA and the Hubble Heritage Team (STScI/AURA))

Ursa Major, the Tadpole Galaxy, the Crab Nebula — when it comes to naming objects in space, it sometimes seems like astronomers wish they'd gone into zoology. Continuing in this long tradition, a researcher has recently identified mammoth column-shaped structures carved from gas and dust that he has called Giant Elephant's Trunks.

Regular-size astronomical Elephant's Trunks are well-studied entities. When newborn stars are young, they emit colossal amounts of radiation, which can erode nearby interstellar gas and dust. Dense pockets of material are more resistant to this erosion, protecting downstream gas and dust from the radiation pressure and creating long filaments that resemble pachyderm proboscises, according to NASA.

Related: 10 Interesting Places in the Solar System We’d Like to Visit

Famous examples of such structures include the Horsehead Nebula and the Elephant's Trunk Nebula, as well as the highly photogenic Pillars of Creation found in the Eagle Nebula. Researchers often investigate Elephant's Trunks because they are the sites of star birth and early evolution.

Using data from a survey of the plane of the Milky Way Galaxy conducted by the Nobeyama 45-meter Radio Telescope in Japan, astronomer Yoshiaki Sofue spotted three Elephant's Trunks in two minor spiral arms 15,000 to 22,000 light-years away, known as the Scutum and Norma arms. They were at least an order of magnitude greater in size and mass than previously seen entities.

Ordinary Elephant's Trunks are generally a few light-years across and perhaps 10 times the mass of our sun. Sofue observed three objects between 65 and 160 light-years long, each weighing around 1,000 to 10,000 times the mass of the sun. A paper describing the discoveries is set to appear in the Publications of the Astronomical Society of Japan.

Because the smaller column-shaped structures are cradles for newborn stars, Sofue told Live Science that the Giant Elephant's Trunks could be created by large-scale star formation activity in the galaxy. Perhaps they are regions from which spherical collections of small stars arise, he suggested.

Now that he has trumpeted these findings, Sofue said he would like to conduct a systematic inspection of his data in the hopes of uncovering more Giant Elephant's Trunks and listing them in an astronomical atlas for other researchers to study.

Editor's Note: This article was corrected to note that Sofue used data from, but did not conduct, the survey of the Milky Way galaxy. The article also removed reference to globular clusters; that is not what the  spherical collections of small stars that may arise from Giant Elephant's Trunks are called.