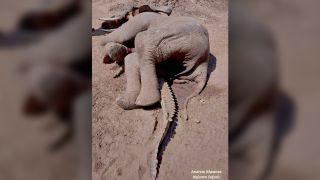 The reptile's long tail is visible, but most of the crocodile's body is hidden under the bulk of the elephant that crushed it to death.
(Image: © Copyright Kafunta Safaris, Zambia/Image by Andrew Mwanza)

A recent confrontation between an elephant and a crocodile ended in a surprising twist that left both combatants dead, with the crocodile flattened underneath the fallen pachyderm.

A photo that was captured in Zambia's South Luangwa National Park by a guide with Kafunta Safaris showed the grim and surprising scene: A dead elephant lay on top of an equally dead crocodile, the reptile's long tail extending beyond the elephant's splayed hind legs. Other photos of the gruesome scene show dozens of vultures and other scavengers crowding around the carcasses.

The safari company shared images of the remains on Facebook, calling the death poses "extremely strange." But what may have led to this highly unusual tableau?

Related: Beastly Feasts: Amazing Photos of Animals and Their Prey

Safari guide Andrew Mwanza discovered the carcasses on Oct. 8 on a bank of the Luangwa River near one of Kafunta Safaris' campsites, a company representative told Live Science in an email. Accompanying Mwanza at the time were several safari guests and an armed scout from Zambia's Department of National Park and Wildlife (DNPW).

The dead elephant and crocodile both appeared to be young individuals, based on their body sizes; a later inspection by the DNPW and officials with Conservation South Luangwa ruled out poaching as the elephant's cause of death, as there were no bullets found in the body, according to the email.

Nile crocodiles (Crocodylus niloticus) are plentiful in the Luangwa River, and they often prey on elephants that come to cross the river or to drink from the water's edge, the representative said. Adult crocodiles can grow to be 20 feet (6 meters) long and can weigh as much as 1,650 lbs. (748 kilograms), according to National Geographic. By comparison, an adult African elephant (Loxodonta africana) weighs between 5,000 and 14,000 lbs. (2,268 and 6,350 kg), so crocodiles typically avoid attacking healthy adult elephants, said Marisa Tellez, co-founder of the Crocodile Research Coalition with the Marine Science Institute at the University of California in Santa Barbara.

"From the pictures I've seen, the croc was a small subadult or small adult, and I highly doubt it was trying to take an injured adult elephant down. That seems like a lot of work for a smaller predator, and not in its favor," Tellez told Live Science in an email. "Of course, you will always have more bold individuals that will take more than they bargained for," Tellez added. "I am also wondering if this may have been a young female defending her nest from an elephant possibly trampling all over it."

In general, crocodiles are more likely to target elephants that are young, ill or injured. The dead elephant in the photo was probably sick or hurt — "maybe previously attacked by lions" — when it encountered the crocodile, said the representative.

Crocodiles are ambush predators, and when they lunge at an elephant they usually grab its vulnerable trunk, said Agata Staniewicz, a crocodile researcher and doctoral candidate with the Behavioural, Acoustic and Sensory Ecology Lab at the University of Bristol in the United Kingdom.

"A healthy adult (sometimes with the assistance of the herd) can usually fight off the crocodile, though it may sustain severe injuries to the trunk," Staniewicz told Live Science in an email. "However, an injured or sick elephant might not have been strong enough to fight."

After struggling with the river predator, the elephant may have simply collapsed from its injuries or from exhaustion, and as it fell it landed on the reptile and crushed it to death, the Kafunta Safaris representative said.

Although this story had an unhappy ending for the elephant and crocodile, plenty of nearby scavengers were clearly thrilled with the outcome, Kafunta Safaris representatives wrote on Facebook.

"All this made for a huge and happy meal for dozens of vultures," the representatives said.