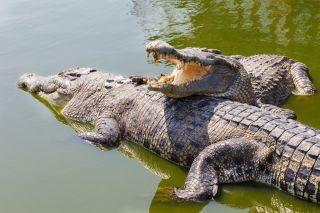 Crocodiles are large reptiles found in tropical regions of Africa, Asia, the Americas and Australia. They are members of the order Crocodilia, which also includes caimans, gharials and alligators.

What do crocodiles eat?

Crocodiles are carnivores, which mean they eat only meat. In the wild, they feast on fish, birds, frogs and crustaceans. At the zoo, they eat small animals that have already been killed for them, such as rats, fish or mice. They also eat live locusts.

In the wild, crocodiles will clamp down on their prey with their massive jaws, crush it, and then they will swallow the prey whole. They do not have the capability to chew or break off small pieces of food like other animals.

To help with digestion, crocodiles swallow small stones that grind up the food in their stomachs. Thanks to their slow metabolisms, crocodiles can survive for months without food.

Where do crocodiles live?

During the Mesozoic Era, about 100 million years ago, the Crocodilia order was one of the top animals on the food chain. Today, crocodiles are found in the tropical habitats of Africa, Asia, Australia and the Americas. They normally live near lakes, rivers, wetlands and even some saltwater regions.

One of the largest known populations of American crocodiles is found in the Dominican Republic's at a large saltwater lake called Lago Enriquillo, according to National Geographic.

Crocodiles live in tropical climates for a reason. They are cold-blooded and cannot generate their own heat. During colder months, they hibernate or go dormant. Crocodiles will also go dormant during long periods of drought. To create a place to hibernate, they dig out a burrow in the side of river bank or lake and settle in for a long sleep.

According to the Integrated Taxonomic Information System (ITIS), the taxonomy of crocodiles is:

The Cuban crocodile is one of the world’s most endangered species of crocodile. It is considered critically endangered and has a population of only about 4,000. Poaching is a constant threat to the crocodile species.

The American crocodile is also considered vulnerable by the International Union for Conservation of Nature and Natural Resources, but their populations are increasing.

Crocodiles are often confused with alligators, but there are some easy-to-spot differences. An alligator's jaw is U-shaped, while a crocodile has a V-shaped jaw, according to the San Diego Zoo. Crocodiles also have teeth that stick up over their upper lip when their mouths are closed.

Another difference between alligators and crocodiles is that crocs have salt glands on their tongues. These modified salivary glands help crocs tolerate living in salt water. Alligators and caimans have lost the ability to secrete excess salt through the tongue glands and therefore, they prefer to live in freshwater areas.

When a crocodile loses a tooth, it is quickly replaced. These reptiles can go through 8,000 teeth over a lifetime.

Crocodiles don't sweat. To keep cool, they open their mouths in a process that is called "mouth gaping," which is a lot like panting.

"Crying crocodile tears" refers to a person expressing insincere remorse. It is a saying that goes back to about the 16th century. Crocodiles DO produce tears. Their lachrymal glands secrete a fluid behind their third eyelid, called a nictitating membrane. The fluid helps clean the eye, lubricate it and reduce bacteria. Crocodile tears aren't usually noticeable unless the croc has been out of the water for a while and the eyes begin to dry out.

In addition to their strong jaws, crocodiles also have very keen hearing. It is so good, they can hear their babies calling from inside their egg.

Crocodiles are very fast swimmers, which helps them catch their prey. They can swim up to 20 mph (32 kph) and can hold their breath underwater for around one hour. On land, crocodiles aren't nearly as fast. They can only run up to 11 mph (17.6 kph) for a short distance.

It is illegal to hunt crocodiles for their skin. This makes their skin very rare. A purse made from crocodile skin can cost more than $10,000.