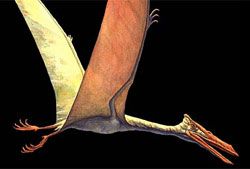 Pterodactyl is the common term for the winged reptiles properly called pterosaurs, which belong to the taxonomic order Pterosauria. Scientists typically avoid using the term and concentrate on individual genera, such as Pterodactylus and Pteranodon.

There are at least 130 valid pterosaur genera, according to David Hone, a paleontologist at Queen Mary University of London. They were widespread and lived in numerous locations across the globe, from China to Germany to the Americas.

Pterosaurs first appeared in the late Triassic Period and roamed the skies until the end of the Cretaceous Period (228 to 66 million years ago), according to an article published in 2008 in the German scientific journal Zitteliana. Pterosaurs lived among the dinosaurs and became extinct around the same time, but they were not dinosaurs. Rather, pterosaurs were flying reptiles.

The first pterosaur discovered was Pterodactylus, identified in 1784 by Italian scientist Cosimo Collini, who thought he had discovered a marine creature that used its wings as paddles.

A French naturalist, Georges Cuvier, proposed that the creatures could fly in 1801, and then later coined the term "Ptero-dactyle" in 1809 after the discovery of a fossil skeleton in Bavaria, Germany. This was the term used until scientists realized they were finding different genera of flying reptiles. However, "pterodactyl" stuck as the popular term.

Pterodactylus comes from the Greek word pterodaktulos, meaning "winged finger," which is an apt description of its flying apparatus. The primary component of the wings of Pterodactylus and other pterosaurs were made up of a skin and muscle membrane that stretched from the animals' highly elongated fourth fingers of the hands to the hind limbs.

The reptiles also had membranes running between the shoulders and wrists (possibly incorporating the first three fingers of the hands), and some groups of pterosaurs had a third membrane between their legs, which may have connected to or incorporated a tail.

Early research suggested pterosaurs were cold-blooded animals that were more suited to gliding than active flying. However, scientists later discovered that some pterosaurs, including Sordes pilosus and Jeholopterus ninchengensis, had furry coats consisting of hairlike filaments called pycnofibers, suggesting they were warm-blooded and generated their own body heat, according to a 2002 study in the Chinese Science Bulletin.

What's more, a 2010 study in the journal PLOS ONE suggested pterosaurs had powerful flight muscles, which they could use to walk as quadrupeds (on all fours) like vampire bats and vault into the air.  Once airborne, the largest pterosaurs (Quetzalcoatlus northropi) could reach speeds of over 67 mph (108 kph) for a few minutes and then glide at cruising speeds of about 56 mph (90 kph), the study found.

Pterodactylus antiquus (the only known species of the genus) was a comparatively small pterosaur, with an estimated adult wingspan of about 3.5 feet (1.06 meters), according to a 2012 study in the journal Paläontologische Zeitschrift. There was some confusion early on as to the size of the Pterodactylus, because some of the specimens turned out to be juveniles rather than adults.

Pteranodon, discovered in 1876 by Othniel C. Marsh, was much bigger. It had a wingspan that ranged from 9 to 20 feet (2.7 to 6 m), according to a 2000 study in Current Research in Earth Sciences, a peer-reviewed bulletin of the Kansas Geological Survey.

The smallest pterosaur, called Nemicolopterus crypticus, was discovered in the western part of China's Liaoning Province. It had a wingspan of only 10 inches (25 centimeters), according to a description of the animal, published 2008 in the journal Proceedings of the National Academy of Sciences.

One of the largest pterosaurs is believed to be Quetzalcoatlus northropi, whose wingspan reached 36 feet (11 m), according to the 2010 PLOS ONE article.

Another large pterosaur was Coloborhynchus capito, which had a wingspan of about 23 feet (7 m). This discovery, described in a 2012 article in the journal Cretaceous Research, followed an examination of a fossil that had been in the Natural History Museum of London since 1884.

Given the large number of different types of pterosaurs, the physical characteristics of the winged reptiles varied widely depending on the genera.

Pterosaurs often had long necks, which sometimes had throat pouches similar to pelicans' for catching fish. Most pterosaur skulls were long and full of needlelike teeth. However, pterosaurs of the taxonomic family Azhdarchidae, which ruled the Late Cretaceous skies and included Quetzalcoatlus northropi, were toothless, according to a 2014 study in the journal ZooKeys.

A distinguishing feature of pterosaurs was the crest on their heads. Though it was initially thought that pterosaurs had no crests, it's now known that crests were widespread across pterosaur genera and came in various forms.

For instance, some pterosaurs had big, bony crests, while other crests were fleshy with no underlying bone. Some pterosaurs even appear to have had a saillike crest made up of a membrane sheet connecting two large bones on the head. "We now know that pterosaur crests had all kinds of [bone and flesh] combinations," Hone told Live Science.

Over the years, scientists have proposed many possible purposes for these crests, including that they were used for heat regulation or to serve as rudders during flight. "But almost all of the hypotheses have failed the most basic tests," Hone said, adding that models show the crests aren't effective rudders and many small pterosaurs have crests even though they wouldn't have needed them to dissipate heat.

What seems most likely is that the crests were used for sexual selection, Hone and his colleagues argued in a 2011 study in the journal Lethaia.

There are several lines of evidence that support this function of the crests, Hone explained, perhaps most notably that juveniles, which look like miniature versions of adult pterosaurs, don't have crests, suggesting the structures are used for something that is only relevant to adults, such as mating.

What did pterosaurs eat?

Pterosaurs were carnivores, though some may have occasionally ate fruits, Hone said. What the reptiles ate depended on where they lived — some species spent their lives around water, while others were more terrestrial.

In 2014, Hone sought to learn more about the lives of marine pterosaurs. With these animals, juveniles dominate the fossil record, Hone said. This is odd because young animals are generally those that are targeted by predators, preventing them from becoming part of the fossil record.

One hypothesis to explain this strange occurrence is that the juvenile pterosaurs often died by drowning instead of being eaten. To test this, Hone and his colleague Donald Henderson modeled how well could pterosaurs float on water (like ducks). They found that pterosaurs floated well, but they had poor floating postures, in which their heads rested very close to the water, if not on the water.

This suggests that aquatic pterosaurs wouldn't spend much time on the water's surface and would launch into the air shortly after diving for food to avoid drowning. However, young pterosaurs that don't yet have strong muscles or are still learning to fly would have more difficulties launching back into the air from a dive, possibly resulting in drowning, Hone said.