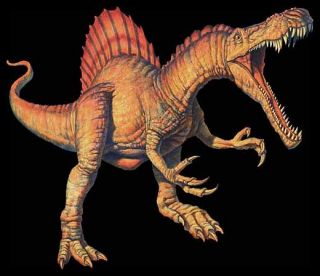 Spinosaurus was the biggest of all the carnivorous dinosaurs, larger than Tyrannosaurus and Giganotosaurus. It lived during part of the Cretaceous period, about 112 million to 97 million years ago, roaming the swamps of North Africa.

Spinosaurus means "spine lizard," an appropriate descriptor, as the dinosaur had very long spines growing on its back to form what is referred to as a "sail." The distinctive spines, which grew out of the animal's back vertebrae, were up to 7 feet (2.1 meters) long and were likely connected to one another by skin.

Recent fossil evidence shows Spinosaurus was the first dinosaur that was able to swim, and likely spent most of its life in the water, according to a study published September 2014 in the journal Science. "Spinosaurus had short hind limbs (like early whales and other animals that spent more and more time in the water), dense and compact bones (penguins show a similar bone profile in cross section), wide and flat claws and feet (possibly used in paddling), and a long and slender snout with conical teeth (perfect for catching fish)," said Nizar Ibrahim, a University of Chicago vertebrate paleontologist and lead author of the study.

Function of the sail

There has been much scientific debate regarding the evolution and purpose of Spinosaurus' sail. Because of its size, this dinosaur did not have many predators, but the sail could have been used to ward off enemies, as the dinosaur would have appeared to be twice its size with the sail fully extended. The dinosaur's upper spine was fairly flexible, and its vertebrae had ball-and-socket joints, meaning it was likely able to arch its back to a point. It may have been able to spread the sail when threatened or looking to attract a mate.

In a 1997 study published in the Journal of Paleontology, paleontologist Jack Bowman Bailey proposed that Spinosaurus and the similar Ouranosaurus didn't have sails after all, and instead had large, bisonlike backs. (Ouranosaurus was another spiny dinosaur, which lived in the same general area as Spinosaurus a few million years earlier.) These humps, Bailey argued, would have acted as dissipative "heat shields" that, unlike sails, would have helped the dinosaurs survive in the hot and dry environment they were thought to have lived in (it's now known that their environment was actually a lush swamp).

Other paleontologists have hypothesized that Spinosaurus used its sail to regulate its body temperature by absorbing heat or storing fat. However, Ibrahim and his colleagues found that the spines were composed of dense bones with few blood vessels and were likely wrapped snugly in skin, which doesn't support the thermoregulation idea.

"The sail was likely used as a display structure," Ibrahim told Live Science. "It would have been visible from far away and even when the animal was swimming. This way, the animal could convey information about its age, size and … gender to other animals, in particular other Spinosaurus."

Additionally, some paleontologists, Ibrahim included, have hypothesized that the sails were brightly colored (much like the fins of some modern-day reptiles), making them even better display structures. But, Ibrahim notes, "the sail likely had more than one function."

Spinosaurus was larger than both T. rex and Giganotosaurus, which was previously the largest carnivorous dinosaur known. But it's unclear just how big Spinosaurus was, due to incomplete fossils.

The partial Spinosaurus skeleton Ibrahim his colleagues analyzed suggests the specimen was 50 feet (15.2 m) long and still growing. The fossils also suggest Spinosaurus' long neck and trunk shifted the dinosaur's center of mass forward. This allowed the animal to move easily in water, but made movement on land nearly impossible unless the dinosaur used all four legs.

Spinosaurus had a long and narrow snout at the end of its skull, and a small crest above its eyes. It had six or seven needlelike teeth on each side of the very front of the upper jaw and another 12 teeth behind those. There were also a few large, slanted teeth that interlocked at the end of the snout. While its jaw was powerful, none of the teeth were serrated, making it unlikely that it could have used them to tear into tough prey. This gives credence to the theory that it mostly survived on fish and carcasses.

What did Spinosaurus eat?

Spinosaurus is thought to have survived primarily on fish, including giant coelacanths, sawfish, large lungfish and sharks, which lived in the dinosaur's river system, according to Ibrahim. "The skull of Spinosaurus has 'fish eating' written all over it, so those are the kinds of animals Spinosaurus would have preyed on," he said.

In addition to anatomical evidence, chemical analyses also suggest Spinosaurus preferred to dine on fish, a 2010 study in the journal Geology shows.

In 2004, researchers found a tooth belonging to Irritator challengeri — a spinosaur, or dinosaur in Spinosaurus' taxonomic family, Spinosauridae — embedded in the remains of a Cretaceous pterosaur (flying reptile). The find, detailed in the journal Nature, suggests the fish-loving spinosaurs also hunted (or scavenged) nonaquatic animals.

Spinosaurus lived in Egypt and Morocco. There is speculation that the Sahara is rich with Spinosaurus fossils, but the harsh environment makes them difficult to unearth. [Images: Digging Up a Swimming Dinosaur Called Spinosaurus]

Very few Spinosaurus fossils have been discovered, and no complete remains have been found. The first Spinosaurus partial skeleton was unearthed in 1912 by Richard Markgraf in the Bahariya Formation of western Egypt.

These original remains, which were described and named by Ernst Stromer in 1915, were destroyed in Allied bombing raids on Munich, Germany, during World War II. It is only due to Stromer's meticulous notes, including detailed descriptions and sketches, that much of the scant knowledge surrounding this dinosaur has been retained.

In 2011, a neck vertebra from a dinosaur, believed to be a spinosaur, with a snout resembling that of a crocodile was found in Australia, showing that the dinosaur family had a much wider range than scientists had previously thought possible, according to the study published in the journal Biology Letters.