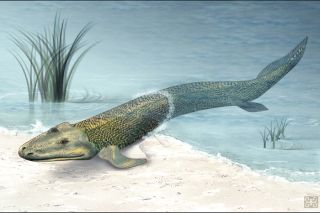 The earliest known tetrapod was Tiktaalik rosae. It is considered to be the link between the lobe-finned fishes and early amphibians. Tiktaalik was probably mostly aquatic, “walking” on the bottom of shallow water estuaries.
(Image: © Zina Deretsky, National Science Foundation)

The Devonian Period occurred from 416 million to 358 million years ago. It was the fourth period of the Paleozoic Era. It was preceded by the Silurian Period and followed by the Carboniferous Period. It is often known as the “Age of Fishes,” although significant events also happened in the evolution of plants, the first insects and other animals.

The supercontinent Gondwana occupied most of the Southern Hemisphere, although it began significant northerly drift during the Devonian Period. Eventually, by the later Permian Period, this drift would lead to collision with the equatorial continent known as Euramerica, forming Pangaea.

The mountain building of the Caledonian Orogeny, a collision between Euramerica and the smaller northern continent of Siberia, continued in what would later be Great Britain, the northern Appalachians and the Nordic mountains. Rapid erosion of these mountains contributed large amounts of sediment to lowlands and shallow ocean basins.  Sea levels were high with much of western North America under water. Climate of the continental interior regions was very warm during the Devonian Period and generally quite dry.

The Devonian Period was a time of extensive reef building in the shallow water that surrounded each continent and separated Gondwana from Euramerica. Reef ecosystems contained numerous brachiopods, still numerous trilobites, tabulate and horn corals. Placoderms (the armored fishes) underwent wide diversification and became the dominant marine predators. Placoderms had simple jaws but not true teeth.  Instead, their mouths contained bony structures used to crush or shear prey. Some Placoderms were up to 33 feet (10 meters) in length. Cartilaginous fish such as sharks and rays were common by the late Devonian. Devonian strata also contain the first fossil ammonites.

By the mid-Devonian, the fossil record shows evidence that there were two new groups of fish that had true bones, teeth, swim bladders and gills. The Ray-finned fish were the ancestors of most modern fish. Like modern fish, their paired pelvic and pectoral fins were supported by several long thin bones powered by muscles largely within the trunk. The Lobe-finned fish were more common during the Devonian than the Ray fins, but largely died out. (The coelacanth and a few species of lungfish are the only Lobe-finned fishes left today.) Lobe-finned fishes had fleshy pectoral and pelvic fins articulating to the shoulder or pelvis by a single bone (humerus or femur), which was powered by muscles within the fin itself. Some species were capable of breathing air through spiracles in the skull. Lobe-finned fishes are the accepted ancestors of all tetrapods.

Plants, which had begun colonizing the land during the Silurian Period, continued to make evolutionary progress during the Devonian. Lycophytes, horsetails and ferns grew to large sizes and formed Earth’s first forests.  By the end of the Devonian, progymnosperms such as Archaeopteris were the first successful trees. Archaeopteris could grow up to 98 feet (30 meters) tall with a trunk diameter of more than 3 feet. It had a softwood trunk similar to modern conifers that grew in sequential rings. It did not have true leaves but fern-like structures connected directly to the branches (lacking the stems of true leaves). There is evidence that they were deciduous, as the most common fossils are shed branches. Reproduction was by male and female spores that are accepted as being the precursors to seed-bearing plants. By the end of the Devonian Period, the proliferation of plants increased the oxygen content of the atmosphere considerably, which was important for development of terrestrial animals. At the same time carbon dioxide (CO2), a greenhouse gas, was depleted from earlier levels. This may have contributed to the cooling climate and the extinction event at the end of the Devonian.

Arthropod fossils are concurrent with the earliest plant fossils of the Silurian. Millipedes, centipedes and arachnids continued to diversify during the Devonian Period. The earliest known insect, Rhyniella praecusor, was a flightless hexapod with antennae and a segmented body. Fossil Rhyniella are between 412 million and 391 million years old.

Early tetrapods probably evolved from Lobe-finned fishes able to use their muscular fins to take advantage of the predator-free and food-rich environment of the new wetland ecosystems. The earliest known tetrapod is Tiktaalik rosae. Dated from the mid-Devonian, this fossil creature is considered to be the link between the lobe-finned fishes and early amphibians. Tiktaalik was probably mostly aquatic, “walking” on the bottom of shallow water estuaries. It had a fish-like pelvis, but its hind limbs were larger and stronger than those in front, suggesting it was able to propel itself outside of an aquatic environment.  It had a crocodile-like head, a moveable neck, and nostrils for breathing air.

The close of the Devonian Period is considered to be the second of the “big five” mass extinction events of Earth’s history. Rather than a single event, it is known to have had at least two prolonged episodes of species depletion and several shorter periods. The Kellwasser Event of the late middle Devonian was largely responsible for the demise of the great coral reefs, the jawless fishes and the trilobites. The Hangeberg Event at the Devonian/Carboniferous Boundary killed the Placoderms and most of the early ammonites. Causes of the extinction are debated but may be related to cooling climate from CO2 depletion caused by the first forests. Although up to 70 percent of invertebrate species died, terrestrial plants and animals were largely unaffected by these extinction events.