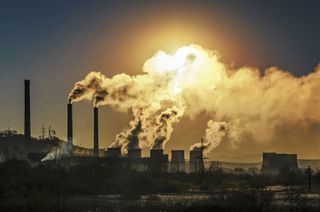 Greenhouse gases are being emitted into the atmosphere with dire consequences.
(Image: © Shutterstock)

Solar radiation and the "greenhouse effect"

Global warming isn't a new concept in science. The basics of the phenomenon were worked out well over a century ago by Svante Arrhenius in 1896. His paper, published in the Philosophical Magazine and Journal of Science, was the first to quantify the contribution of carbon dioxide to what scientists now call the "greenhouse effect."

The greenhouse effect occurs because the sun bombards Earth with enormous amounts of radiation, which strike Earth's atmosphere in the form of visible light, plus ultraviolet (UV), infrared (IR) and other types of radiation that are invisible to the human eye. About 30 percent of the radiation striking the Earth is reflected back out to space by clouds, ice and other reflective surfaces. The remaining 70 percent is absorbed by the oceans, the land and the atmosphere, according to NASA.

As they absorb radiation and heat up, the oceans, land and atmosphere release heat in the form of IR thermal radiation, which passes out of the atmosphere into space. The balance between incoming and outgoing radiation keeps Earth's overall average temperature at about 59 degrees Fahrenheit (15 degrees Celsius), according to NASA.

The gases in the atmosphere that absorb radiation are known as "greenhouse gases" (sometimes abbreviated as GHG) because they are largely responsible for the greenhouse effect. The greenhouse effect, in turn, is one of the leading causes of global warming. The most significant greenhouse gases are water vapor (H2O), carbon dioxide (CO2), methane (CH4) and nitrous oxide (N2O), according to the Environmental Protection Agency (EPA). "While oxygen (O2) is the second most abundant gas in our atmosphere, O2 does not absorb thermal infrared radiation," said Michael Daley, an associate professor of environmental science at Lasell College in Massachusetts.

While some argue that global warming is a natural process and that there have always been greenhouse gases, the amount of gases in the atmosphere has skyrocketed in recent history. Before the Industrial Revolution, atmospheric CO2 fluctuated between about 180 parts per million (ppm) during ice ages and 280 ppm during interglacial warm periods. Since the Industrial Revolution, though, the amount of CO2 has increased 100 times faster than the increase when the last ice age ended, according to the National Oceanic and Atmospheric Administration (NOAA).

Fluorinated gases — that is, gases to which the element fluorine was added — including hydrofluorocarbons, perfluorocarbons and sulfur hexafluoride, are created during industrial processes and are also considered greenhouse gases. Though they are present in very small concentrations, they trap heat very effectively, making them high "global-warming potential" (GWP) gases.

Chlorofluorocarbons (CFCs), once used as refrigerants and aerosol propellants until they were phased out by international agreement, are also greenhouse gases.

There are three factors affect the degree to which any greenhouse gas will influence global warming, as follows:

Carbon dioxide has a significant impact on global warming partly because of its abundance in the atmosphere. According to the EPA, in 2016, U.S. greenhouse gas emissions totaled 6,511 million metric tons (7,177 million tons) of carbon dioxide equivalents, which equaled 81 percent of all human-caused greenhouse gases — down 2.5 percent from the year before. Additionally, CO2 stays in the atmosphere for thousands of years.

However, methane is about 21 times more efficient at absorbing radiation than CO2, giving it a higher GWP rating, even though it stays in the atmosphere only about 10 years, according to the EPA.

Some greenhouse gases, like methane, are produced through agricultural practices, including livestock manure. Others, like CO2, largely result from natural processes like respiration and from the burning of fossil fuels like coal, oil and gas.

The second cause of CO2 release is deforestation, according to research published by Duke University. When trees are killed to produce goods or heat, they release the carbon that is normally stored for photosynthesis. This process releases nearly a billion tons of carbon into the atmosphere per year, according to the 2010 Global Forest Resources Assessment.

Forestry and other land-use practices can offset some of these greenhouse gas emissions, according to the EPA.

Worldwide, the output of greenhouse gases is a source of grave concern. From the time the Industrial Revolution began to the year 2009, atmospheric CO2 levels have increased almost 38 percent and methane levels have increased a whopping 148 percent, according to NASA, and most of that increase has been in the past 50 years. Because of global warming, 2016 was the warmest year on record, and with 2018 on track to be the fourth warmest, 20 of the hottest years on record have all come after 1998, according to the World Meteorological Organization.

"The warming we observe affects atmospheric circulation, which impacts rainfall patterns globally," said Josef Werne, an associate professor in the Department of Geology and Planetary Science at the University of Pittsburgh. "This will lead to big environmental changes, and challenges, for people all across the globe."

In answer to the problems caused by global warming by greenhouse gases, the U.S. government created a climate action plan in 2013. And in April 2016, representatives from 73 countries signed the Paris Agreement, an international pact to combat climate change by investing in a sustainable, low-carbon future, according to the United Nations Framework Convention on Climate Change (UNFCCC). The U.S. was included among the countries that agreed to the accord in 2016, but began proceedings to withdraw from the Paris Agreement in June 2017.

According to the EPA, greenhouse gas emissions were 12 percent lower in 2016 than in 2005, in part due to the large decrease in fossil fuel combustion resulting from the switch to natural gas from coal. The warmer winter conditions during those years also reduced the need for many homes and businesses to turn up the heat.

Researchers around the world continue to work toward finding ways to lower greenhouse gas emissions and mitigate their effects. One potential solution scientists are examining is to suck the carbon dioxide out of the atmosphere and bury it underground indefinitely, said Dina Leech, an associate professor of biological and environmental sciences at Longwood University in Virginia.

"What we can do is minimize how much carbon we put up there, and as a result, minimize the temperature change," Leech said. "However, the window of action is quickly closing."

This article was updated on Jan. 3, 2019, by Live Science contributor Rachel Ross.