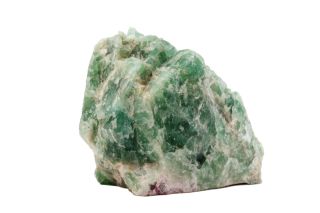 The most reactive element on the Periodic Table, fluorine has a violent history in the quest for its discovery. Despite the difficult and sometimes explosive properties of fluorine, it is a vital element for humans and animals, which is why it is commonly found in drinking water and toothpaste.

Early chemists tried for years to isolate the element from various fluorides. However, fluorine does not occur free in nature and no chemical substance is capable of freeing fluorine from any of its compounds due to its reactive nature.

For centuries, the mineral fluorspar was used in metal refining. Known today as calcium fluoride (CaF2), it was used as a flux to separate pure metal from the unwanted minerals in ore, according to Chemicool. The "fluor" comes from the Latin word "fluere," meaning "to flow," because that's what fluorspar allowed metals to do. The mineral was also called Bohemian emerald and was used in glass etching, according to the Jefferson Laboratory.

Many scientists over the decades attempted to experiment with fluorspar to better learn its properties, as well as its composition. In their experiments, chemists often produced fluoric acid (today known as hydrofluoric acid, HF), an incredibly reactive and dangerous acid. Even small splashes of this acid on skin can be fatal, according to Chemicool. Several scientists were injured, blinded or killed in some of the experiments.

In the early 19th century, scientists Andre-Marie Ampere, in France, and Humphry Davy, in England, corresponded about the possibility of a new element within the acid. In 1813, Davy announced the discovery of the new element and named it fluorine from Ampere's suggestion.

Henri Moissan, a French chemist, finally isolated fluorine in 1886 — after being poisoned several times in his pursuit. He was awarded the Nobel Prize in 1906 for the isolating fluorine by electrolysis of dry potassium hydrogen fluoride (KHF2) and dry hydrofluoric acid.

For many years, fluorine salts, or fluorides, have been used in welding and for frosting glass, according to the Royal Society. For example, hydrofluoric acid is used to etch the glass of light bulbs.

Fluorine is a vital element in the nuclear energy industry, according to the Royal Society. It is used to make uranium hexafluoride, which is needed to separate uranium isotopes. Sulfur hexafluoride is a gas used to insulate high-power electricity transformers.

Chlorofluorocarbons (CFCs) were once used in aerosols, refrigerators, air conditioners, foam food packaging, and fire extinguishers. Those uses have been banned since 1996 because they contribute to ozone depletion, according to the National Institutes of Health. Prior to 2009, CFCs were used in inhalers to control asthma but those types of inhalers were phased out in 2013.

Fluorine is used in many fluorochemicals, including solvents and high-temperature plastics, such as Teflon (poly(tetrafluoroethene), PTFE). Teflon is well known for its non-stick properties and is used in frying pans. It is also used for cable insulation, for plumber's tape and as the basis of Gore-Tex® (used in waterproof shoes and clothing).

Health and environmental impacts of fluorine

Although all humans and animals are exposed to and need minute amounts of fluorine, the element in any large enough dose is extremely toxic and dangerous. According to Lenntech, fluorine can naturally be found in water, air, and both plant and animal-based foods in small amounts. Larger amounts of fluorine are found in a few food products such as tea and shellfish.

While small amounts of fluorine are essential for maintaining the strength of our bones and teeth, too much can have the reverse effect of causing osteoporosis or tooth decay, as well has potentially harming the kidneys, nerves, and muscles.

In its gaseous form, fluorine is incredibly dangerous. Small amounts of fluorine gas can case eye and nose irritation while larger amounts can be fatal, according to Lenntech. Hydrofluoric acid, as another example, can also prove to be fatal when even a small splash on the skin occurs, according to Chemicool.

In the environment, fluorine, the 13th most abundant element in Earth's crust, typically settles within the soil and readily combines with soil, rock, coal and clay, according to Lenntech. Plants may absorb the fluorine from the soil, although high concentrations can lead to damage. Corn and apricots, for example, are among the plants that are most susceptible to damage and growth reduction when exposed to elevated levels of fluorine.

Although fluorine can be toxic when the concentration within the body is too high, it can also be a beneficial element to include in cancer drugs, according to a 2018 article published in the Journal of Fluorine Chemistry. According to the research, replacing carbon-hydrogen or carbon-oxygen bonds with a carbon-fluorine bond in the active components of the drug usually shows an improvement of the drugs' effectiveness, including higher metabolic stability, increased binding to target molecules, and enhanced membrane permeability. It is hoped that with the increased effectiveness of the drugs, in conjunction with tumor-specific target drugs or targeted drug delivery systems, the quality of life of cancer patients can be greatly improved over traditional methods such as chemotherapy, in which cancer cells, as well as healthy cells, are targeted by the drugs.