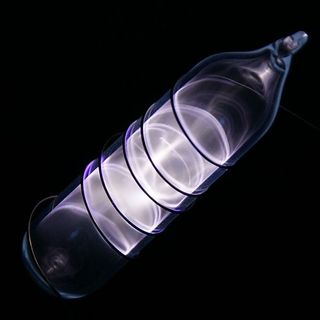 It's not just Superman's home planet; Krypton is one of the rarest gases on Earth, composing only 1 part per million of the atmosphere by volume.

This noble gas is colorless and odorless. It has a full outer shell of electrons, rendering it largely inert to reactions with other elements. Unlike its fellow noble gas neon, however, krypton does make some compounds. The most common is the colorless solid krypton difluoride (KrF2), according to the Thomas Jefferson National Linear Accelerator Laboratory. Krypton difluoride is only stable below minus 22 degrees Fahrenheit (minus 30 degrees Celsius), according to Chemicool.

Because krypton is so rare (and thus expensive), it has limited use. The gas is injected into some incandescent lightbulbs, because it extends the life of the tungsten filament that makes those bulbs glow, according to Universal Industrial Gases Inc., a supplier of industrial gases production equipment and related services. Because it is such a heavy gas, krypton is also sealed between the glass of some double-paned windows to help them trap heat. But even for this purpose, the noble gas argon is usually used because it is cheaper, according to Universal Industrial Gases.

The discovery of krypton occurred partially by accident. Scottish chemist William Ramsay and English chemist Morris Travers were extracting argon for air in hopes of evaporating it and finding a lighter chemical element to fill the gap in the Periodic Table between argon and helium.

Inadvertently, however, the researchers overdid the evaporation, leaving only a heavy gas sample behind, according to Chemicool. Wondering if they might find something anyway, they analyzed the light spectrum of the gases in the sample and found something unknown — a brand-new element. This new element was not lighter than argon, but heavier. The researchers dubbed this discovery "krypton," from the Greek word for "hidden," kryptos.

Pew! Pew! OK, they don't actually make that sound, but krypton-fluorine lasers are a powerful scientific tool — and they're responsible for at least one Guinness World Record. These lasers can produce a pulse of energy 500 times as strong as the entire U.S. electrical grid in just four-billionths of a second, according to Chemicool. In July 2014, researchers at the U.S. Naval Research Laboratory celebrated their entry into the Guinness Book of World Records for using a powerful krypton-fluorine laser to accelerate plastic foils to speeds of 1,000 kilometers per second (more than 2.2 million mph) in less than a millimeter of distance. Those experiments were conducted in 2009; since then, researchers have boosted the laser-driven speeds to 1,180 km/s. The purpose, other than winning world records, is to advance research on nuclear fusion.

Krypton has other scientific superpowers as well. Radioactive isotopes of krypton — versions of the atom with differing numbers of neutrons in their nuclei — are produced naturally when cosmic rays from space hit krypton atoms in the atmosphere, said Christo Buizert, a postdoctoral researcher in geology and geophysics at Oregon State University. These radioactive isotopes are unstable, meaning they decay over time.

This timed decay creates an atomic "clock," not unlike carbon-14, a radioactive element with a half-life of about 5,000 years. Carbon-14 is great for dating organic objects that date back tens of thousands of years, but many elements of the Earth are far older, Buizert said.

He and his colleagues have used a krypton isotope, krypton-81, with a half-life of 230,000 years to date ice cores in the Antarctic back to 120,000 years old. (The oldest Antarctic ice ever found fell as snow 800,000 years ago.) Bubbles in the ice trap atmospheric gases as they were when the snow fell, Buizert told Live Science. By measuring the levels of krypton-81 and comparing them to the current atmosphere, researchers can use the known rate of decay of the isotope to determine the ice's age.

"If krypton-81 is the same as it is in the atmosphere, we can tell the ice is young and very recent," Buizert said. "If it is older, there is less and less krypton-81 in the sample."

The krypton-81 measurement technique is only about a decade old, Buizert said. Because krypton-81 (and krypton in general) is quite rare in the atmosphere, using the gas for dating requires a lot of material — 220 lbs. (100 kilograms) of ice, in the case of the Antarctic ice-dating study that the researchers published in April 2014 in the journal Proceedings of the National Academy of Sciences. The actual sampling of the ice was done only two years before the paper was published, Buizert said. Since then, the technology has improved so much that only 44 lbs. (20 kg) of ice would be needed today for the same study. Researchers are now seeking even older ice in Antarctica, hoping to find some dating back as far as 1.5 million years. These ice samples hold clues about the ancient climate and atmosphere at the time when the snow fell.

Far from the glaciers of Antarctica, krypton-81 has also been used to date amazing old groundwater in the Sahara Desert. A 2004 study in the journal Geophysical Research Letters revealed that in certain areas of southwestern Egypt, the groundwater reaching the surface hasn't seen the light of day for 1 million years.

Another isotope of krypton, krypton-85, is largely produced as a byproduct of nuclear fission. By measuring levels of krypton-85 in the atmosphere over secretive countries like North Korea, researchers can pinpoint locations that might harbor hidden nuclear facilities. In 2003, for example, the BBC reported that sensors along the North Korean border had noted high levels of krypton-85 that did not emanate from the country's main nuclear plant — suggest a second, secret plant. North Korea tested nuclear bombs in 2006, 2009 and 2013, according to the nonprofit Nuclear Threat Initiative.