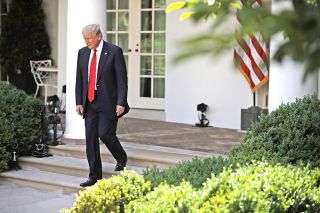 President Donald Trump arrives to announce his decision regarding the United States' participation in the Paris climate agreement in the Rose Garden at the White House June 1, 2017.
(Image: © Chip Somodevilla/Getty)

President Donald Trump is pulling the United States out of the Paris Agreement, a worldwide accord that was developed to curb rising global temperatures and limit climate change in the coming years.

"In order to fulfill my solemn duty to protect America and its citizens, the United States will withdraw from the Paris climate accord," Trump said at a news conference today (June 1).

It's unclear how the people working on the departure — a small team that includes Scott Pruitt, the Environmental Protection Agency administrator — will proceed. They could pursue a formal withdrawal, which could take three to four years to complete, or they could exit the 1992 United Nations Framework Convention on Climate Change, which describes how countries should set up climate change agreements, such as the Kyoto Protocol and the Paris Agreement, according to Axios. [Trump Pulls Out of Paris Climate Deal: 5 Likely Effects]

The Paris Agreement is designed to slow global warming by reducing greenhouse gas emissions and by stepping up investments in "green" technology. Nearly 200 countries agreed on the deal in December 2015 and signed it in 2016. By working together, nations around the world are trying to keep the planet's average temperature from rising more than 3.6 degrees Fahrenheit (2 degrees Celsius) above Earth's average temperature during preindustrial times. However, the agreement has an even more ambitious goal: "to limit the temperature increase even further to 1.5 degrees Celsius [2 degrees F]," according to the United Nations.

Earth's average temperature is already fairly close to this cutoff: It's about 2.2 degrees Fahrenheit (1.2 degrees Celsius) warmer than it was during preindustrial times, Peter deMenocal, a paleoclimate scientist at the Lamont-Doherty Earth Observatory at Columbia University in New York, told Live Science in April.

Each nation participating in the agreement is expected to develop an individual plan to cut emissions of greenhouse gases, such as carbon dioxide, that contribute to climate change, as well as invest in energy-efficient technology.

Under the previous administration, President Barack Obama said the nation would cut domestic greenhouse gas emissions 26 percent to 28 percent below 2005 levels by 2025, in addition to giving up to $3 billion in aid to less-developed countries by 2020, according to The New York Times. The United States has given $1 billion of this sum already, The New York Times reported.

However, the Paris Agreement is nonbinding, and there aren't any penalties if countries do not meet their goals. If the United States leaves the agreement, it will join the two other countries that have not ratified the climate pact: Nicaragua and Syria. (Nicaragua has not signed on because its government did not think the agreement did enough to fight climate change, according to Time.)

There is ample evidence from climate scientists, including those at NASA and the Intergovernmental Panel on Climate Change, showing that the effects of climate change are already being felt, Katherine Moore Powell, a climate ecologist at The Field Museum in Chicago, said in a statement emailed to Live Science.

She added that "without comprehensive action at a global scale, especially from the largest emitters (the U.S. is number two), climate change effects will continue to accelerate."

Big corporations — including Chevron, ExxonMobil, BP, Microsoft, Apple, Starbucks, Monsanto and Google — have advised Trump to stay in the agreement, according to CNN Money. Yesterday (May 31), SpaceX founder and CEO Elon Musk said he will resign from the White House advisory councils if Trump pulls the country out of the agreement, reported Live Science's sister site Space.com.

The United States' departure won't cause the agreement to fall apart, but it will likely weaken it, especially if other countries follow suit. Moreover, countries that remain a part of the agreement might cooperate less with the United States in the future and, in a worst-case scenario, even impose carbon tariffs on the U.S., according to The New York Times.

More than 97 percent of all climate scientists think that climate change is real and that humans are likely to blame, according to a 2016 study published in the journal Environmental Research Letters. In addition, 70 percent of people in the United States say they believe climate change is happening, according to a recent survey by Yale University.

The survey also found that 82 percent of participants said the United States should fund research into renewable energy sources, and 75 percent said the country should regulate carbon dioxide as a pollutant, Live Science previously reported.