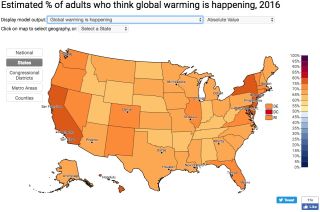 This color-coded map shows that the majority of American say that climate change is happening.
(Image: © Yale Program on Climate Change Communication)

Most Americans believe that climate change is real, Sen. Sheldon Whitehouse told his colleagues in Congress on Wednesday (April 5).

The speech was the Democratic senator's 163rd "Time to Wake Up" address on climate change that he has delivered to the Senate over the years. [The Year in Climate Change: 2016's Most Depressing Stories]

Most of the data Whitehouse pulled came from Yale's 2016 climate opinion maps — a series of interactive infographics. The graphics are based on data produced from a statistical model, which is based on the national survey responses of more than 18,000 people from 2008 to 2016.

Some opinions don't quite mesh with scientific reality. Just 49 percent of people thought that "most scientists think global warming is happening," the survey found. In reality, 97 percent of all climate scientists agree that climate change is happening and that humans are very likely the cause of it, according to a 2016 study in the journal Environmental Research Letters.

However, the majority of respondents — some 71 percent — trusted climate scientists about global warming, the survey showed.

A whopping 82 percent of respondents said the country should fund research into renewable energy sources, and 75 percent said the United States should regulate carbon dioxide as a pollutant, the survey found.

"Despite this support, President [Donald] Trump recently proposed massive cuts, showing once again that the Trump show is not the America show, even in fossil fuel states," Whitehouse said.

For instance, Trump's 2018 budget proposal suggests cutting $1.7 billion, or 6 percent, from the Department of Energy's budget, which provides funding for the nation's energy policies and research, including the National Renewable Energy Laboratory in Colorado. The budget proposal also cuts $5.7 billion, or 31 percent, from the Environmental Protection Agency (EPA), which in addition to developing and enforcing environmental regulations, runs the Energy Star program that helps buyers find energy-efficient appliances and buildings.

The majority of respondents also supported setting strict carbon dioxide limits on existing coal-fired power plants, the survey showed. However, Trump's March 28 executive order that rolls back the Clean Power Plan eliminates a federal regulation that would have set limits on emissions of carbon dioxide and other pollutants from power plants, Live Science recently reported.

In an interview with Fox's Chris Wallace on April 2, EPA Administrator Scott Pruitt defended the executive order against the Clean Power Plan.

"The president is keeping his promise to the American people to roll back regulatory overreaches that have been occurring the last couple of years," Pruitt told Wallace.

Meanwhile, 34 percent of Congress (both senators and representatives) doubt that climate change is real, according to a 2016 survey given by the Center for American Progress Action Fund, an independent, nonpartisan policy institute and advocacy organization.

Whitehouse also noted that in 2009, Trump and some of his children — Ivanka, Donald Jr. and Eric — signed an advertisement in The New York Times saying that they "supported meaningful and effective measures… to fight climate change," which they called "scientifically irrefutable," Whitehouse said.