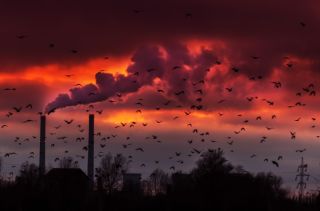 Withdrawing from the Paris deal could put at least 1.4 extra gigatons of carbon dioxide in the atmosphere each year by 2025.
(Image: © Calin Tatu/Shutterstock)

President Donald Trump's decision to pull the United States out of the Paris climate agreement could deal a staggering blow to the nascent international cooperation on climate change.

"The United States will withdraw from the Paris Climate Accord, but begin negotiations to reenter either the Paris Accord or an entirely new transaction on terms that are fair to the United States, its businesses, its workers, its people, its taxpayers," Trump announced in the Rose Garden at the White House today (June 1). "So we're getting out."

Without the United States, other signatories on the deal will likely soldier on, experts say. But the likelihood of international cooperation on carbon-cutting goals past 2025 is on far shakier ground, and the United States will be forfeiting a seat at the table to shape the climate future.

"It's really hard to move forward on climate without the cooperation of the United States," said Michael Wara, a professor of law at Stanford University and a fellow at Stanford's Woods Institute for the Environment. "We're too big of a trading partner, we're obviously a major fossil fuel producer … It's really hard for other countries to make meaningful, deep reductions without the United States playing ball." [The Reality of Climate Change: 10 Myths Busted]

The consequences of the decision aren't fully mapped. But here are five ways that the choice today (June 1) will likely affect both the climate and the United States' global standing.

1. No promises on warming

The Paris climate agreement sets a goal for its signatories to keep warming below 3.6 degrees Fahrenheit (2 degrees Celsius), compared with preindustrial times, by 2100, with an eye toward the ambitious goal of keeping global warming to a mere 2.7 degrees Fahrenheit (1.5 degrees Celsisus). Each country sets its own voluntary goals for emissions cuts, pledging to become stricter as time goes by, and there are no binding rules about how the countries should meet those goals. In reality, as Climate Interactive's analysis found, the commitments by signatory countries are already short of the 3.6 degree F goal and would likely lead to about 6 degrees F (3.3 degrees C) of warming by 2100. That's less, however, than the "business- as-usual" scenario that would cause 7.6 degrees F (4.2 degrees C) of warming relative to preindustrial temperatures.

Under the Obama administration, the United States agreed to reduce its greenhouse gas emissions to between 26 percent and 28 percent of 2005 levels by 2025. The agreement does not officially go into effect until 2020, but meeting those goals would require the country to take steps — like setting standards for vehicle emissions, appliances and power plants — before 2020.

The Kyoto Protocol of the 1990s, which the United States never ratified, included countries responsible for just 14 percent of global emissions, said Robert Stavins, director of the Harvard Environmental Economics Program. The Paris Agreement, in contrast, includes 126 countries, which are responsible for 97 percent of the world's greenhouse gas emissions. The agreement was a breakthrough, Stavins said.

"Withdrawal from Paris Climate Agreement puts [the] USA with Nicaragua and Syria," Stavins wrote in an email to Live Science, naming the two countries in the world that are not part of the pact. [8 Ways Global Warming Is Already Changing the World]

The United States could have stayed in the Paris Agreement and simply renegotiated to a less-strict timeline for emissions cuts, Stavins said, but now there is no timeline at all. The United States' pledged emissions cuts had represented 21 percent of the total cuts pledged by all signing countries. According to Climate Interactive, not following through with the agreement essentially means putting an extra 1.4 gigatons of carbon dioxide into the atmosphere each year up until 2025, compared with following through.

2. No chance to negotiate

The United States' emissions alone aren't the only outcome that matters. America's lack of commitment will likely ripple outward. As part of the Paris Agreement, the United States had the opportunity to shape negotiations going forward, Wara told Live Science.

"The Paris Agreement is not a single deal. It's not about one target," he said. "It creates an ongoing process for renewing the commitment every five years."

Trump's decision to withdraw damages that process, Wara said, and kicks the feet out from under an international effort that was just taking its first steps.

Though the withdrawal process takes four years during which the United States will technically be a party to negotiations, it's unlikely that other countries will put much stock in a power that is about to exit the agreement, Wara said. If Trump had stayed in, his administration could have helped articulate the next U.S. commitment past 2025, and the United States could have been a part of negotiating how countries will report their emissions and how the program will be implemented in reality.

The fact that the Paris Agreement included developing economies was a huge step, Stavins and Wara said. India, for example, was nervous about joining the agreement, Wara said, but has been committing itself strongly to renewable and clean energy sources. India committed to lowering its emissions by 33 percent to 35 percent below 2005 levels under the Paris accord, according to Climate Action Tracker, and is likely to reach its goal of getting 40 percent of its power from non-fossil fuel sources by 2022, not 2030, as was its original goal.

It's likely that everyone else in the Paris Agreement will meet their 2025 goals, Wara said, but not so clear whether they'll commit to similar levels of ambition for the next five-year phase.

"It remains to be seen what happens if the U.S. walks away from that," Wara said.

4. No reason to innovate

In the United States, electricity emissions are falling, with or without the Paris agreement. This change has been driven in large part by simple economics — natural gas is inexpensive and is replacing carbon-heavier coal as a feedstock, and more renewable sources are coming online, too, Wara said. But there's a limit to how much simple economics can drive the climate equation. Because innovation in oil and gas exploration has driven down the price of oil, gasoline is cheap and vehicle emissions are headed in the wrong direction, Wara said. Paris might have pushed the United States to make changes in sectors that have not been as sensitive to the economic pressures facing coal, such as making cleaner-energy cars.

"I think we'll achieve the Clean Power Plan without the Clean Power Plan," Wara said, referring to an Environmental Protection Agency (EPA) program to reduce greenhouse gas emissions that Trump is expected to eliminate. "But that's not nearly enough."

5. No reason for trust

Perhaps most alarming, Wara said, is how Trump's decision on climate policy will affect national security.

"The withdrawal of the U.S. from Paris does enormous damage to our international credibility, in general, Wara said. Other issues requiring international cooperation, like corralling North Korea or coping with the Syrian crisis, are going to be harder to negotiate without trust from other nations, Wara said.

"The U.S. desperately needs that kind of trust in order to get the kind of outcomes we need internationally," he said.

The withdrawal from international negotiations is becoming a pattern, both Wara and Stavins noted. The United States withdrew from the Trans-Pacific Partnership trade deal under Trump's first executive order. Trump is also hostile to the North Atlantic Treaty Organization (NATO), in which members pledge military cooperation with one another. With the United States stepping back from cooperation, Stavins said, nations like China and Russia are freer to pursue their interests — and that is true for climate, as well.

"Withdrawal from Paris Climate Agreement hands leadership in this realm and others to China," Stavins said.