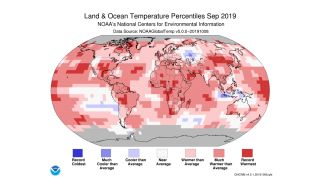 Is it hot in here? Turns out, for much of the globe, September 2019 was indeed as hot as it felt. In fact, that month tied the record for the warmest September since record-keeping began 140 years ago, and was the warmest ever for North America.

Data sets of global temperature averages dating to 1880 are maintained by the National Oceanic and Atmospheric Administration (NOAA). And with much warmer temperatures than usual, September blazed to the top position on the list as the warmest September of all, alongside September 2015.

However, it wasn't just September that experienced unusual warmth; to date, 2019 is also the second-warmest January through September ever recorded, according to a new NOAA climate report.

Temperatures across North America were warmer than the 20th century average by 3.1 degrees Fahrenheit (1.7 degrees Celsius). In fact, the entire Northern Hemisphere broiled under record-breaking temperature averages, which exceeded those of the 20th-century by 2.3 F (1.3 C).

"South America, Africa, Asia, the Gulf of Mexico and the Hawaiian region had a top-three warmest September on record," NOAA wrote in the report. Worldwide, September's average land and sea-surface temperatures were hotter than the 20th-century average, by about 1.7 F (0.95 C).

This is the 43rd consecutive September — and the 417th consecutive month overall — to experience temperatures that soared above the previously established average for the 20th century, according to the report.

Sea-ice cover in Antarctica this September was only about 1% lower than the average for the month for the past 30 years. But September's loss of sea ice in the Arctic was far more dramatic: at 807,000 square miles (2,100,000 square kilometers), the area covered by sea ice was around 33% less abundant than it was between 1981 and 2010.

For the past five years, September temperatures have been hotter than in recorded history, and since 2005, Earth has seen the 10 warmest Septembers on record, NOAA reported.