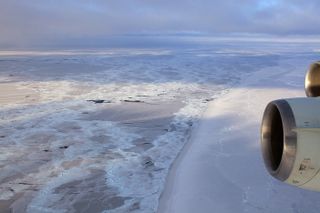 This image from 2010 shows the boundary between permanent and seasonal sea ice in the Arctic Ocean, northwest of Greenland.
(Image: © NASA)

Earth's already-beleaguered northern icecap suffered another blow this month with the early collapse of a barrier that kept some of Arctic's most durable ice in place.

The ice arch across the Nares Strait, which separates Greenland from Ellesmere Island in Canada's far northeast, gave way two months earlier than usual, said Laurence Dyke, a paleoglaciologist at the Geological Survey of Denmark and Greenland.

"On May 10, this arch disintegrated, leaving the oldest and thickest sea ice in the Arctic vulnerable to being swept south where it will melt away," Dyke told Seeker. "Over the last two weeks, the area of broken ice has expanded massively to the north, and lots of Arctic sea ice is flowing southwards through the Nares Strait."

The channel and the Lincoln Sea, at the northern tip of Greenland, are normally covered by a sheet of ice several meters thick until around July, Dyke said. Usually, ice sheets that cover the strait are anchored to land and don't move, blocking the passage of sea ice through the strait.

But as heat-trapping fossil-fuel emissions like carbon dioxide build up in the atmosphere, the Arctic is warming twice as fast as the rest of the globe. And this year, land-anchored ice in the strait failed to form amid the record warmth and record low sea ice coverage recorded across the Arctic. That left only an arch of ice at the northern end of the strait, where it joined the Lincoln Sea — the structure that gave way earlier this month.

"This is especially important as the Lincoln Sea contains the last bastion of old, thick multi-year sea ice," Dyke said.

The Nares Strait is the smaller of two passages that can funnel ice from that area toward the Atlantic.

The Fram Strait, on the east side of Greenland, carries "significantly more," said Twila Moon, a glaciologist at the National Snow and Ice Data Center in Colorado — "But every little bit counts."

And the loss of multi-year ice is already a chronic problem in the Arctic. It forms the heart of next year's sea ice and provides habitat for whales, seals, and birds.

"It's also playing a role to reduce the amount of heat the ocean can take in during the summer," Moon said. If less ice is floating on the surface of the Arctic ocean, the dark-colored sea will absorb more of the Sun's energy — "and of course, more heat in the ocean reduces our sea ice further, and we get a runaway effect."

"Each of these small events adds up, and they're not good news," she added.

RELATED: Despite Debate, Estimates of Humanity's Impact on Climate Change Are Accurate

This year's event isn't unprecedented: Something similar happened in 2007. But when that occurred, "that led to the largest flux of Arctic Sea ice through Nares Strait in at least the last 15 years," Dyke said.

"Multi-year ice has been steadily declining over the last two decades, and this early break-up will surely destroy another large portion of it," he said.

Since sea ice is floating in water already, its melting doesn't add to sea-level rise — which a recent study suggests has accelerated dramatically since the 1990s. But the warming of the surrounding oceans is already starting to eat away at the miles of ice that cover Greenland.

Dykes was part of a 2015 expedition to study the Greenland's massive Petermann Glacier, which overlooks the Nares Strait, and said that the loss of sea ice is starting to affect that structure.

RELATED: The Arctic Ocean May Soon Have Its Very Own ‘Garbage Patch'

Sea ice buttresses the glacier, keeping it from breaking apart. And there's some evidence that less sea ice may result in warmer water making contact with the edges of the ice sheet, further eating away at it. In the last decade, the glacier has seen two calving events in which Manhattan-sized chunks of ice broke off into the ocean, and scientists are watching a new crack that has emerged this spring.

"You can think a bit about it as a canary in a coal mine," Dyke said. "It's almost the most northerly glacier in the whole of Greenland, so if there are changes happening up there, you can be sure that the rest of Greenland is feeling those effects as well."