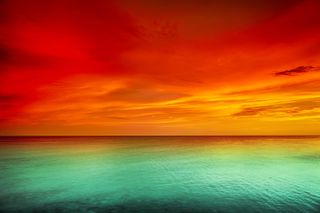 The ocean is the hottest it's ever been, and no, this is not normal.

A new report released in the journal Advances in Atmospheric Sciences on Jan. 15 reveals that ocean temperatures in 2018 reached their highest point since accurate measurements first began in the 1950s.

The heat increase in the world's oceans from 2017 (the previous record holder) to 2018 is equivalent to about 388 times the total electricity generation of China in 2017, according to a statement about the research released by the Institute of Atmospheric Physics in China.

Ocean temperatures down to 2,000 meters (6,600 feet) were calculated using data from various measurement devices. Those includes Argo, a set of free-floating devices that measure temperature and salt concentration in the waters.

The change in ocean temperatures is a good way to gauge the effect that human activity is having on our planet, because the vast majority of heat trapped by greenhouse gases in the atmosphere gets absorbed by the oceans, the paper said.

Warming oceans can have far-reaching effects. As water warms, temperature and moisture levels in the air also rise, which can lead to increased intensity and duration of storms and heavy rains, according to the paper.

Increased ocean temperatures can also accelerate the melting of sea ice, leading to sea level rise and increased coastal flooding. In the water, higher temperatures can reduce oxygen levels, leading to so-called dead zones, where plants and animals can't survive. And if the surface of the ocean warms by 2 degrees Celsius (3.6 degrees Fahrenheit) this century, 99 percent of the world's coral reefs will be bleached, leaving them more vulnerable to disease, the paper said.

The new data, together with a rich body of literature, serve as an additional warning to both the government and the general public that we are experiencing inevitable global warming," study lead author Lijing Cheng, an associate professor at the Institute of Atmospheric Physics of the Chinese Academy of Sciences, said in the statement. The warming is already causing damage and losses to economy and society, he added.

Just last week, another study, this one published in the Proceedings of the National Academy of Sciences by a different group, modeled ocean temperatures further back in time. That study found that ocean temperatures have warmed by 426 x 10^21 since 1871. According to The Guardian, this is about 1,000 times the annual energy use of the entire globe.