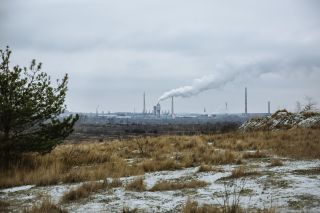 While other planets in Earth's solar system are either scorching hot or bitterly cold, Earth's surface has relatively mild, stable temperatures. Earth enjoys these temperatures because of its atmosphere, which is the thin layer of gases that cloak and protect the planet.

However, 97 percent of climate scientists agree that humans have changed Earth's atmosphere in dramatic ways over the past two centuries, resulting in global warming. To understand global warming, it's first necessary to become familiar with the greenhouse effect, though.

Energy in, energy out

There's a delicate balancing act occurring every day all across the Earth, involving the radiation the planet receives from space and the radiation that's reflected back out to space.

Earth is constantly bombarded with enormous amounts of radiation, primarily from the sun. This solar radiation strikes the Earth's atmosphere in the form of visible light, plus ultraviolet (UV), infrared (IR) and other types of radiation that are invisible to the human eye.

UV radiation has a shorter wavelength and a higher energy level than visible light, while IR radiation has a longer wavelength and a weaker energy level. About 30 percent of the radiation striking Earth's atmosphere is immediately reflected back out to space by clouds, ice, snow, sand and other reflective surfaces, according to NASA. The remaining 70 percent of incoming solar radiation is absorbed by the oceans, the land and the atmosphere. As they heat up, the oceans, land and atmosphere release heat in the form of IR thermal radiation, which passes out of the atmosphere and into space.

It's this equilibrium of incoming and outgoing radiation that makes the Earth habitable, with an average temperature of about 59 degrees Fahrenheit (15 degrees Celsius), according to NASA. Without this atmospheric equilibrium, Earth would be as cold and lifeless as its moon, or as blazing hot as Venus. The moon, which has almost no atmosphere, is about minus 243 F (minus 153 C) on its dark side. Venus, on the other hand, has a very dense atmosphere that traps solar radiation; the average temperature on Venus is about 864 F (462 C).

The exchange of incoming and outgoing radiation that warms the Earth is often referred to as the greenhouse effect because a greenhouse works in much the same way.

A similar phenomenon takes place in a car parked outside on a cold, sunny day. Incoming solar radiation warms the car's interior, but outgoing thermal radiation is trapped inside the car's closed windows.

"Gas molecules that absorb thermal infrared radiation, and are in significant enough quantity, can force the climate system. These type of gas molecules are called greenhouse gases," Michael Daley, an associate professor of Environmental Science at Lasell College told Live Science. Carbon dioxide (CO2) and other greenhouse gases act like a blanket, absorbing IR radiation and preventing it from escaping into outer space. The net effect is the gradual heating of Earth's atmosphere and surface, a process known as global warming.

These greenhouse gases include water vapor, CO2, methane, nitrous oxide (N2O) and other gases, according to the Environmental Protection Agency (EPA). Since the dawn of the Industrial Revolution in the early 1800s, the burning of fossil fuels like coal, oil and gasoline have greatly increased the concentration of greenhouse gases in the atmosphere, especially CO2, National Oceanic and Atmospheric Administration (NOAA). "Deforestation is the second largest anthropogenic source of carbon dioxide to the atmosphere ranging between 6 percent and 17 percent," said Daley.

Atmospheric CO2 levels have increased by more than 40 percent since the beginning of the Industrial Revolution, from about 280 parts per million (ppm) in the 1800s to 400 ppm today. The last time Earth's atmospheric levels of CO2 reached 400 ppm was during the Pliocene Epoch, between 5 million and 3 million years ago, according to the University of California, San Diego's Scripps Institution of Oceanography.

The greenhouse effect, combined with increasing levels of greenhouse gases and the resulting global warming, is expected to have profound implications, according to the near-universal consensus of scientists.

If global warming continues unchecked, it will cause significant climate change, a rise in sea levels, increasing ocean acidification, extreme weather events and other severe natural and societal impacts, according to NASA, the EPA and other scientific and governmental bodies.

There are those that say that gases are not the cause of global warming, though that goes against the opinion of the global scientific community. "I think that measuring with precision human activity on the climate is something very challenging to do, and there's tremendous disagreement about the degree of impact. So no, I would not agree that it's a primary contributor to the global warming that we see," EPA chief Scott Pruitt told CNBC's morning news show "Squawk Box" March 9, 2017. [Carbon Dioxide Is Warming the Planet (Here's How)]

Can the greenhouse effect be reversed?

Currently, some scientists are investigating how to re-engineer the atmosphere to reverse global warming. For example, theories published in the journal Science in July 2017 by lrike Lohmann and Blaž Gasparini, researchers at the Institute of Atmospheric and Climate Science at ETH Zurich in Switzerland, proposed reducing cirrus clouds that trap heat.

"If cirrus clouds behave like a blanket around the Earth, you're trying to get rid of that blanket," Lohmann, a professor of experimental atmospheric physics at ETH Zurich, told Live Science. [Cool the Planet? Geoengineering Is Easier Said Than Done] "You remove the water vapor, you remove the humidity and you prevent the normal cirrus cloud formation," Lohmann said.

For the latest information on the greenhouse effect, visit: