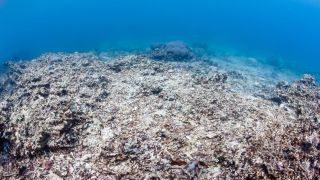 Ocean acidification refers to the process of our planet's oceans becoming more acidic due to the global increase in carbon dioxide emissions.

Since the Industrial Revolution, experts estimate that Earth's oceans have absorbed more than a quarter of the atmospheric carbon dioxide (CO2) released from the burning of fossil fuels. Once in the ocean, the dissolved carbon dioxide undergoes a series of chemical reactions that increase the concentration of hydrogen ions while lowering the ocean's pH and carbonate minerals — a process called ocean acidification.

Studies have shown that ocean acidification could have dramatic consequences for marine life and communities whose livelihoods depend on our ocean's resources.

When carbon dioxide from the atmosphere is dissolved in seawater, it forms carbonic acid and releases hydrogen ions. Acidity or alkalinity is determined by the number of hydrogen ions (H+) dissolved in water and is measured by the pH scale. These hydrogen ions bond with available carbonate ions (CO3-) to form bicarbonate (HCO3-), depleting the available carbonate in the oceans. That's a big deal because less carbonate in the oceans makes it more difficult for calcifying creatures such as corals, clams, sea urchins or plankton to form their calcium carbonate (CaCO3) shells or skeletons.

"Right now we're releasing about 10 billion tons of carbon per year into the atmosphere and roughly two and a half billion tons of that goes into the ocean," Scott Doney, a professor of Environmental Sciences at the University of Virginia, told Live Science.

Since industrialization began more than 200 years ago, the pH of the oceans' surface waters has decreased by 0.1 units. This may not seem like much, but pH is logarithmic, meaning every unit represents a tenfold increase in acidity. That 0.1 represents roughly a 30% increase in acidity. It's estimated that by the end of the century, pH may decline by 0.4 units if global emissions continue with a "business as usual" approach, according to the Intergovernmental Panel on Climate Change.

In fact, researchers have found that our oceans are becoming more acidic faster than anytime in the past 300 million years — a period covering four mass extinctions.

"All the way back to the 1950s people were concerned the ocean would be taking up all this carbon," Doney said. "We knew this would change the chemistry of seawater, but we didn't know until the late '90s how sensitive organisms were to ocean acidification."

What ocean acidification does to coral and other marine life

Unfortunately, many of the organisms most sensitive to ocean acidification make up the base of the ecological food web in ocean environments. Threatening these species puts even greater numbers of marine life at risk, and in turn, the communities that rely on the ocean's once bountiful resources. Animals like corals, which are already threatened by rising ocean temperatures, are especially at risk from ocean acidification. Studies have shown that increasing ocean acidification negatively impacts many coral species' ability to grow their calcium skeletons.

On the other hand, studies have shown that tiny, calcifying phytoplankton called coccolithophores are temporarily taking advantage of the changing climate. These single-celled plant-like critters live in abundance in the upper layers of Earth's oceans, soaking up sunlight and carbon dioxide through photosynthesis. Coccolithophores are known for the beautiful and intricate microscopic plates of armor they form from calcium carbonate, called coccoliths. The tiny algae are the primary calcifiers of our oceans and are important contributors to Earth's carbon cycle. When coccolithophores die, their calcite husks sink to the seafloor, depositing carbon.

"In the last few decades, the increase in carbon dioxide has been differentially favoring coccolithophores because their photosynthetic system was not yet saturated [with carbon dioxide], and that extra energy was translated into higher growth rates," said Sara Rivero-Calle, a researcher at the Center for Marine Science at the University of North Carolina, Wilmington. "But once the carbon dioxide levels reach a certain threshold, their growth rates will stop increasing because they will have to divert more energy into calcification as opposed to growth and division. In that sense, coccolithophores are not much different from other calcifiers — the low pH associated with ocean acidification will ultimately make it harder for them to calcify."

How does ocean acidification affect humans?

"Corals are what we call a foundational species because they generate the habitat that other organisms live in. If the corals shift or change, it affects everybody," Doney said. And that includes humans.

"Corals are particularly important to the developing world. Many small coastal and island nations rely on coral reefs for their food supply and the income they generate through recreation and tourism," he said. "The presence of corals also protects their shorelines from storms and waves, so if these reefs start to erode, that protection declines."

Related: Beyond shellfish, ocean acidification is bad for people (Op-Ed)

The Pacific Northwest and northeastern Atlantic coasts of the United States are particularly at risk, Doney said. These regions have multimillion-dollar shellfish industries that are seeing first-hand the effects of localized acidification. Oyster farms in the Pacific Northwest experienced major production failures after billions of oyster larvae dissolved from ocean acidification. The area's wild salmon fisheries may also be in danger as the shells of tiny marine snails called pteropods (a major source of food for juvenile salmon) are known to dissolve in acidic conditions.

Whether you are a microscopic phytoplankton of the sea or a land-loving human being, it is very likely ocean acidification will impact your life in the long run. The bad news is that our oceans will continue to become more acidic as global carbon-dioxide emissions continue.

"Our best case is if we stabilize our carbon emissions. Right now we're at about 410 parts per million of carbon dioxide in our atmosphere," Doney said — a level that would allow ocean acidification to eventually stabilize. "The worst case is that we don't slow carbon emission and acidification continues to grow," he said. "There will be some threshold that ecosystems will reach where they can't keep up anymore."