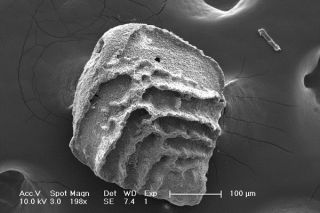 The single-celled organism Stensioeina beccariiformis survived the mass extinction that killed the dinosaurs but went extinct 56 million years ago, when the oceans acidified due to a massive carbon dioxide release.
(Image: © Ellen Thomas)

The oceans are becoming more acidic faster than they have in the past 300 million years, a period that includes four mass extinctions, researchers have found.

Then, as is happening now, increases in carbon dioxide in the atmosphere warmed the planet and made the oceans more acidic. These changes are associated with major shifts in climate and mass extinctions.

But while past increases in the atmosphere's carbon dioxide levels resulted from volcanoes and other natural causes, today that spike is due to human activities, the scientists note.

"What we're doing today really stands out," lead researcher Bärbel Hönisch, a paleoceanographer at Columbia University's Lamont-Doherty Earth Observatory, said in a news release. "We know that life during past ocean acidification events was not wiped out — new species evolved to replace those that died off. But if industrial carbon emissions continue at the current pace, we may lose organisms we care about — coral reefs, oysters, salmon." [Humans Causing 6th Mass Extinction]

As the level of carbon dioxide in the atmosphere increases, oceans absorb that carbon dioxide, which turns into a carbon acid. As a result the pH — a measure of acidity — drops, meaning the water has become more acidic. This dissolves the carbonates needed by some organisms, like corals, oysters or the tiny snails salmon eat.

In their review, published Thursday (March 1) in the journal Science, Hönisch and colleagues found the closest modern parallel about 56 millions ago in what is called the Paleocene-Eocene Thermal Maximum, when atmospheric carbon concentrations doubled, pushing up global temperatures. Extinctions in the deep sea accompanied this shift. (The PETM occurred about 9 million years after the dinosaurs went extinct.)

But, now, the ocean is acidifying at least 10 times faster than it did 56 million years ago, according to Hönisch.

"The current rate of (mainly fossil fuel) carbon dioxide release stands out as capable of driving a combination and magnitude of ocean geochemical changes potentially unparalleled in at least the last 300 million years of Earth history, raising the possibility that we are entering an unknown territory of marine ecosystem change," the researchers conclude in their paper.