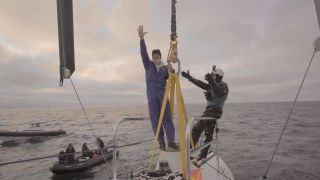 In April, explorer and multimillionaire Victor Vescovo navigated a submersible miles below the ocean surface into the Mariana Trench in the Pacific Ocean, claiming to break a record for the deepest solo dive ever. But the previous record holder, filmmaker James Cameron, begs to differ.

The deepest point on the planet is Challenger Deep, a nearly 7-mile (11 kilometers) -long pit in the Mariana Trench. Back in 1960, oceanographers Don Walsh and Jacques Piccard were the first people to reach the bottom of the trench. But in 2012, Cameron became the first person to reach it alone, breaking the record for deepest solo dive ever.

"What he's done is quite remarkable," Cameron told The New York Times. "Where I take exception is his saying he went deeper." You can't go any deeper because the Challenger Deep is "flat" and "featureless," Cameron said.

This claim comes from his own observations from his 2012 dive and that of a robot sent down by the Woods Hole Oceanographic Institution in 2009, according to the Times. It's possible Vescovo could have found a deeper part of the Challenger Deep, but unlikely, Andy Bowen, the leader of the team that sent the robot down to the deep, told the Times.

What's more, there's a lot of uncertainty surrounding the depth of the Challenger Deep in the first place — estimates for how deep it is vary by over 500 feet (150 m), according to the Times. Indeed, the team reported that the recorded depth could have varied by plus or minus 34 feet (10.5 meters), and it has already revised the measurement to 35,840 feet (10,924 m).

But Vescovo, though paying respect to Cameron, responded by saying that he had indeed identified a deeper point, and his expedition had newer and more accurate technology than Cameron's had at the time. Maybe, he said they should both submit their data to a panel of experts that can make the decision for them.

"Perhaps we will never know," Vescovo told the Times. "All I can do is stand behind the actual data."