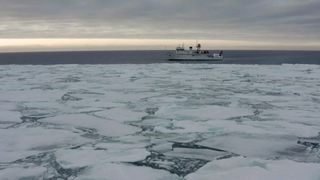 Hidden beneath the Fram Strait, a passage that separates Greenland and Svalbard, lies the deepest point in the Arctic Ocean, where the seafloor plunges some 18,209 feet (5,550 meters) down. And now, explorer Victor Vescovo has become the first person to ever reach it.

The diving feat also makes him the first person to dive to the deepest part of all the world's oceans.

On Aug. 24, Vescovo descended around to the bottom of the so-called Molloy Deep, a frigid trench that sits 170 miles (274 kilometers) west of Svalbard, Norway. To reach Molloy, Vescovo descended in a submersible called the DSV Limiting Factor 40 to 50 miles (64 to 80 km) out from the edge of an ice pack, according to a statement. After Vescovo's initial solo dive, the team dove twice more.

"It was cold, of course, and we only had about six to eight weeks of pretty good weather per year to try it," Vescovo told Live Science. "In the winter, the dive site is covered in ice, and when it isn't, storms can be a problem."

The whole expedition was timed around the narrow weather windows that would have made it possible to dive into the Arctic and Southern Oceans, he added. "Fortunately, the weather gods smiled on us this year."

With these latest dives, Vescovo and his team completed the "Five Deeps Expedition," a mission to reach the bottom of all five of the world's oceans — an achievement filmed for "Deep Planet," a documentary series that will air on the Discovery Channel later this year.

He previously descended to the deepest part of the Atlantic Ocean, the Southern Ocean, the Indian Ocean (where the team discovered a weird critter that looked like a living "balloon on a string") and, of course, the Pacific Ocean.

In May, he broke James Cameron's record for the deepest solo dive ever into the Pacific Ocean. He descended 35,853 feet (10,927 m) to the bottom of Challenger Deep, the deepest point on the planet and part of the Mariana Trench.

Vescovo said his favorite part of being in the deep was going where no one has gone before and "bringing light to places that haven't seen it for millions of years." Exploring the deep was a dream of Vescovo's ever since he was a little boy reading about the great adventures of 20th century explorers.

"If you have the right, gifted, passionate team of people and the tenacity to overcome setbacks, anything is really possible," he said. "There is still an enormous amount to explore for the first time in this world — it is just under the oceans."

Editor's Note: This article was updated to include quotes from Vescovo.