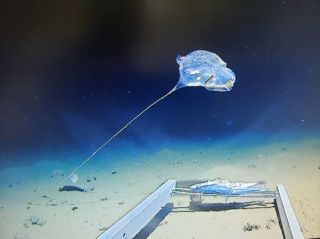 This potentially new species of sea squirt looks like a balloon on a string.
(Image: © Five Deeps Expedition)

The depths of the Indian Ocean are home to some bizarre creatures — including one that looks like a balloon on a string.

Explorers captured a video of this gelatinous creature in a recent dive to the Java Trench, the bottommost part of the Indian Ocean. This dive was one of many in the Five Deeps Expedition, during which the crew aimed to reach the deepest part of all five of the world's oceans.

"We were just watching the video back and saw the thing come out of the darkness," said Alan Jamieson, the chief scientist on the expedition and a senior lecturer at Newcastle University in the U.K. "It drifted right towards the camera... and then drifted off again." [In Photos: Spooky Deep-Sea Creatures]

With its long appendage, "almost like a tentacle that holds onto something," it looked like a balloon on a string, he added.

After a literature search, Jamieson found a group in Japan that had described something similar about 20 years ago — a species of stalked ascidian or sea squirt. But there were key differences between the newly found creature and the one described in the literature — the latter had filaments coming off the top of its head, whereas this one doesn't, he said.

There's a "high probability" of this being a new species, since there's no record of such a creature that far down at over 6,500 meters (21,300 feet) he said.

This creature likely anchors itself to the seafloor with its long tentacle, perhaps to keep still in a seismically active seafloor, he said. (Trenches are "seismically active" because they are dips on the seafloor where one tectonic plate is pushed beneath another). As for why the tentacle is so long, Jamieson suggested it might help the creature filter feed up to 3.3 feet (1 meter) above the seafloor.

Because the deepest parts of four out of the five oceans have never been visited by humans before, "it's not a big surprise to our science team that we're spotting some creatures that we are pretty sure are new species," said the creator of the expedition Victor Vescovo, an explorer and businessman, who makes the first dive down to the depths, typically solo, in a small titanium-and-glass sphere submersible.

But not all of the critters they came across were alien to the members of the crew.

They saw more familiar creatures such as starfish and sea cucumbers and several hadal snailfish — palm-size, pinkish, tadpole-like critters with small black eyes and semitransparent bodies, through which their liver is clearly visible.

These snailfish "may not be a new species [because they] look much the same," but it's kind of "interesting" that we have seen it in the deep part of every ocean so far, Jamieson said. Before they visited the Java Trench in the Indian Ocean, the team members dove down to the trenches of the Atlantic Ocean and the Southern Ocean around Antarctica — both of which are home to similar snailfish.

Of all three of the oceans, the Indian Ocean seems to be the one most dense with life, Vescovo said. But, it's also the one that's very undersampled. There's "hardly any record at all," of the creatures down there, Jamieson added.

The members of the research group hope to analyze some of the videos and photos they took down in the depths of our world and publish some findings about their research. In addition, their dives are being filmed for a Discovery Channel documentary series set to air toward the end of the year.

The next stop, in two weeks, is the Mariana Trench in the Pacific Ocean, the deepest part of any of the oceans. This trench is the only one that has been explored by humans — but only twice before, Vescovo said. U.S. Lieutenant Don Walsh and Swiss engineer Jacques Piccard first dove down to the trench back in 1960 and Canadian explorer and filmmaker James Cameron set the record for going the deepest in 2012.