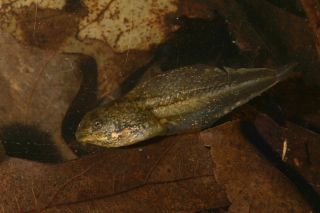 Tadpoles grow pumped-up tails when stressed out by the threat of predators nearby, a new study finds.

These beefed-up tails help the tadpoles escape predators such as dragonfly larvae, according to research published today (Feb. 5) in the journal Proceedings of the Royal Society B. The chemical signal that allows this change is a stress hormone called corticosterone, similar to cortisol in humans.

"The larger picture is that we've known for a long time that animals have what are called plastic responses to the environment," said study researcher Robert Denver, an endocrinologist at the University of Michigan, referring to body changes that occur in response to environmental cues.

"We provide a mechanism for how the environmental signal is sensed and how that's translated into an adaptive morphological response," Denver told LiveScience. [5 Ways Your Cells Deal With Stress]

Denver and his colleagues had already observed that tadpoles housed in the same water as predators respond in two ways. First, they freeze up and stay motionless for hours when first exposed. Then, over the next week or so, the tadpoles develop large, thick tails. (A far more natural process than other recent tadpole news, in which scientists induced tadpoles to grow eyes on their tails.)

These responses only occur when tadpoles sense a pheromone released by other tadpoles upon being attacked. The tadpoles also release this pheromone when they're poked with a hypodermic needle, Denver said, which allows researchers to collect the chemical without feeding the tadpoles to dragonfly larvae.

The researchers wanted to understand how the stress systems of the tadpoles responded to this pheromone. "We know that when animals get attacked by predators, or if there are predators around, they typically mount a stress response, so stress hormones go up," Denver said.

But that's not what happened when the researchers exposed wild-caught tadpoles of the wood frog (Rana sylvatica) to water where dragonfly larvae lived (caged off, so they couldn't hunt the tadpoles). In fact, for the first few hours, the tadpoles actually suppressed their stress systems.

"This allows them to stay quiet for a few hours," Denver said. The drop in stress hormones leads to less of an urge to move around and forage, he said.

Holding still may work for a while, but tadpoles eventually have to get moving again. Their stress hormones seem to facilitate that: By about 24 hours, they'd risen back to baseline levels, the researchers found, and by four days, they were higher than in tadpoles kept in water without predators. This increased corticosterone level persisted for at least eight days after it spiked.

The researchers hypothesized that the corticosterone increase was triggering the tail growth in predator-stressed tadpoles. To test the idea, they exposed tadpoles directly to corticosterone-infused water. Sure enough, the tadpoles' tails grew.

In another experiment, the researchers grew tadpole tails in a dish. Adding corticosterone beefed up the disembodied tails, too.

"That suggests there is an enhanced fitness of these animals," he said.

The researchers next hope to learn more about the structure and the function of the alarm pheromone that triggers these stress hormone changes, ultimately leading to bigger-tailed tadpoles. They'd also like to know more about how corticosterone acts on the tail to make it grow, Denver said.