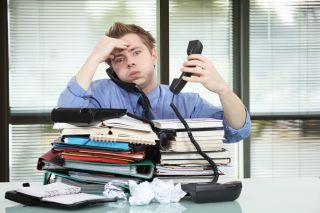 Your heart rate speeds up. Your muscles tense. Your face may even blush. These are just a few ways you feel your body respond to stress. But stress also can seep into your cells. Rising temperatures, toxins, infections, resource shortages and other stressors threaten how cells function — and ultimately whether you're healthy. Scientists funded by the National Institutes of Health have learned a great deal about how cells respond to stress, and here are five examples.

Temperature increases can stress out cells. Warm them just 3 or 4 degrees, and their proteins begin to unravel and stop functioning. If they unravel too much, they tangle up with each other and form a clump that can kill the cell.

To prevent this catastrophe, cells rely on a set of molecules called heat shock proteins (or "chaperones") that work in many different ways. Some tuck the sticky, carbon-rich regions of unfolded proteins into a small pocket; others extend a protective arm around their unfolded neighbors or form barrels that sequester unraveled proteins away from any potential tangling partners. Once things cool down, heat shock proteins help their "clients" refold into proper shapes.

Cells use intricate mechanisms to maintain the stability of their genetic material. Under stressful conditions, however, they may relax these controls. By creating genomic instability, the cells can adapt to stressful conditions in a short period of time. For example, yeast — an organism commonly used to study human genetics — quickly gained or lost entire chromosomes when researchers at the Stowers Institute for Medical Research stressed them with exposure to different chemicals. After prolonged exposure, colonies of yeast with chromosome changes evolved resistance to certain chemicals, including an antibiotic.

In the future, scientists could take advantage of this adaptive strategy to prevent the emergence of drug resistance and potentially treat cancers, which typically involve cells with extra or missing chromosomes. (In photo, red bars represent a gain of chromosomes, and green bars the loss of chromosomes in stressed yeast cells.)

Environmental stress can reach deep into cells' interiors and alter the genetic material held within their nuclei — and the changes can be inherited. A Swedish study showed that limitedfood availability during a man's lifetime was linked to his grandchildren’s risk of diabetes, obesity and cardiovascular disease.

Subsequent research at the University of Massachusetts Medical School showed that when male mice were fed a low-protein diet, the activity of hundreds of genes in the animals' offspring changed. In particular, genes that manufacture fats were more active. While making more fats might be a protective stress response, it also could lead to obesity and related diseases. Genomic research suggests a potential link between these heritable changes in patterns of gene activity and changes in chemical markers, called epigenetic tags, affixed to certain genes. Scientists are trying to understand the nature of these changes and how they occur.

Turn Back the 'Clock'

Every cell in your body has its own Doomsday Clock, ticking down the number of times it can safely divide. This clock takes the form of a cap — called a telomere — on the ends of each chromosome. Like the plastic aglets on the tips of shoelaces, telomeres keep the chromosome from fraying. But telomeres get shorter every time the cell divides.

Shortened telomeres have been linked to age-related diseases, such as arthritis, hypertension, stroke and diabetes, as well as the aging process itself. Research also suggests that chronic stress — both psychological and cellular — can dramatically shorten telomere length, causing cells to age and die prematurely. As a countermeasure, certain cells respond to temporary stressors like fear or infection by upping their production of the enzyme, telomerase, that helps telomeres maintain their length.

If all else fails, a cell may commit suicide via a pathway called apoptosis. This strategy sidesteps the destructive effects of a cell actually dying from the stressful conditions, which can damage or kill nearby healthy cells by triggering inflammation.

Scientists don't yet understand fully how the cell switches from a protective response to apoptosis, but research suggests it has to do with the accumulation of unfolded proteins in a cellular compartment called the endoplasmic reticulum (ER). When stressful conditions, like exposure to a chemical, overwhelm the ER, molecules in its membrane maysignal apoptosis to start. Because cell death could play a role in a number of neurological and cardiovascular diseases, understanding how cells make the life-or-death decision might lead to ways to reduce the damage caused by these types of conditions.