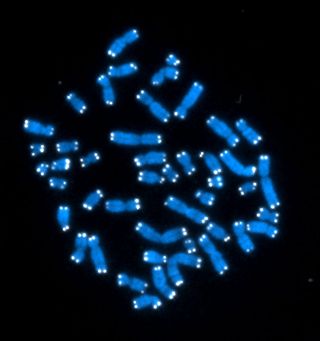 The 46 human chromosomes are shown in blue, with the telomeres appearing as white pinpoints. The DNA has already been copied, so each chromosome is actually made up of two identical lengths of DNA, each with its own two telomeres.
(Image: © Courtesy of Hesed Padilla-Nash and Thomas Ried, National Institutes of Health.)

Every cell in your body has its own Doomsday Clock, ticking down the number of times it can safely divide. This clock takes the form of a cap on the ends of each chromosome, called a telomere. Like the plastic aglets on the tips of shoelaces, telomeres keep the chromosome from fraying. However, they get shorter every time the cell splits.

When the telomeres have shrunk to a certain point, the cell can go one of two ways. It’s supposed to die. But in the case of cancer, the cell keeps living. If scientists could make drugs to control telomeres, they could perhaps treat diseases of aging as well as cancer.

Researchers have known since the 1930s that telomeres cap chromosomes, but it was not until the 1970s that they figured out what those caps are made of. The scientists who first described telomere composition, led by Elizabeth Blackburn at the University of California, San Francisco, needed a rich source of telomeres to study. They found it in a pond-dwelling organism called Tetrahymena. This critter is made of just one cell, and it’s covered in little projections called cilia that give it a fuzzy appearance under the microscope. But for telomere researchers, it’s what’s inside the cell that counts: approximately 20,000 chromosomes, each with telomeres on their ends. Human cells, in contrast, have a mere 46 chromosomes.

Blackburn, Carol Greider of Johns Hopkins University in Baltimore, and Jack Szostak of Harvard Medical School in Boston shared the Nobel Prize in physiology or medicine in 2009 for their National Institutes of Health-funded research on telomeres.

First, they discovered that telomeres are repeats of the same sequence of DNA building blocks, over and over, on the chromosome tips. In people, telomeres consist of the sequence abbreviated as TTAGGG repeated approximately 2,000 times.

The researchers also discovered how cells make more telomeres. This is important in a growing fetus, for example, where cells are dividing rapidly. An enzyme called telomerase adds more of the TTAGGG sequence to the ends of chromosomes, helping the telomeres maintain their length. Most adult body cells, in contrast, keep telomerase tightly controlled and not very active.

When a cell divides into two daughter cells, it has to copy its DNA. But the DNA replication machinery cannot reach the very ends of chromosomes, so 25 to 200 letters at the tips are lost each time. Having telomeres on the ends of the chromosomes means that no important genes are cut off. Telomeres also prevent chromosomes from sticking together.

Another human disease, dyskeratosis congenita, happens when people can’t maintain the telomeres in their bone marrow and die of bone marrow failure. Greider continues her Nobel Prize-winning work by studying mice with broken telomerase, which mimics the disease.

Too much telomerase is a bad thing, too. Most cancers make lots of telomerase—as much as 10 to 20 times the normal amount. The cells don’t stop dividing, and so they form tumors.

Scientists would like to turn off the telomerase in tumors, but first they need to figure out how telomerase works. One researcher in pursuit of the answer, Juli Feigon of the University of California, Los Angeles, is working to describe the three-dimensional structure of telomerase to help scientists understand its function. Once Feigon pins down the shape, scientists might be able to develop drugs that would gum up the works and prevent cells from becoming cancerous.