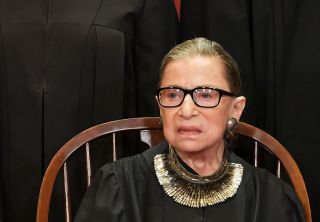 Supreme Court Justice Ruth Bader Ginsburg bounced back yet again after three weeks of radiation therapy for pancreatic cancer. Here she poses for the official photo at the Supreme Court in Washington, D.C. on Nov. 30, 2018.
(Image: © Mandel Ngan/AFP/Getty Images)

Ginsburg began her treatment in early August, less than a year after undergoing surgery to remove one lobe of her lung that had cancerous lesions. Doctors discovered the lesions when treating Ginsburg after she fell and broke three ribs. The justice recovered from her broken ribs and lung surgery and continues to maintain a busy schedule even after this latest health issue, NPR reported.

Localized pancreatic cancer, or cancer growing only in the pancreas, has a 5-year survival rate of 34%, according to the American Cancer Society. Once the cancer spreads to other areas of the body, the 5-year survival rate drops to as low as 3%. After the cancer is cleared, there is still a chance that the cancer will return or a new cancer will develop. Some research suggests that pancreatic cancer survivors may have a higher chance of getting thyroid cancer or small intestine cancer.

"Justice Ginsburg will continue to have periodic blood tests and scans," according to the statement from the Supreme Court.

As part of Ginsburg's treatment, doctors also inserted a stent, or small, hollow tube, in her bile duct, likely to prop the duct open to avoid it from being blocked by cancerous growths. The bile duct carries bile to the liver to help with digestion, and if this pipe gets blocked it can cause a buildup of bile, which leads to jaundice.

The 86-year-old justice, nicknamed the "Notorious RBG," has battled and beaten cancer and other health problems through the years. Just two weeks before her most recent round of treatment she sat down for an interview with NPR's Morning Edition.

"There was a senator, I think it was after my pancreatic cancer, who announced with great glee that I was going to be dead within six months," Ginsburg told NPR. "That senator, whose name I have forgotten, is now himself dead, and I am very much alive."