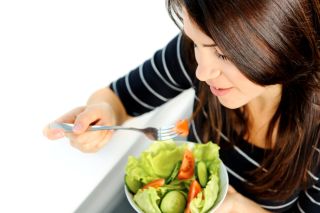 A woman's risk of breast cancer depends on many things, including her genetics, lifestyle and plain old chance. One out of every eight women today will be diagnosed with breast cancer at some point in her life.

There are many risk factors for breast cancer, including some that are out of a woman's control, such as family history and genetics. But some aspects of a woman's lifestyle also affect her risk. Getting regular exercise, maintaining a healthy body weight and avoiding smoking may all lower the risk of breast cancer.

Diet may also affect women's risk of breast cancer, research has shown. While many studies on diet and cancer risk have yielded mixed results, trends in the research suggest that certain foods might truly affect cancer risk.

Estrogen in the fat of dairy products may fuel cancers that are hormone related, including cancers of the breast and prostate, research suggests. In one study of breast cancer patients, women who ate more than one serving daily of high-fat dairy products were about 50 percent more likely to die of breast cancer than other patients. The study was published in the Journal of the National Cancer Institute in March 2013. Other studies have suggested that people who consume high amounts of milk and cheese have higher rates of cancer.

Researchers say that the link may be due to estrogen; this hormone is soluble in fat, so it is found in higher concentrations in high-fat dairy than in lower-fat options, such as skim milk. Some types of breast cancer have estrogen receptors and are fueled by estrogen.

It is proposed that green tea helps patients by limiting the growth of the tumor. Chemicals in green tea called polyphenols appear to inhibit proteins that promote tumor cell growth and migration, according to experimental studies in animals.

A diet rich on folate and folic acid, which are forms of a B vitamin, may be beneficial when it comes to breast cancer, some studies have shown.

A study on postmenopausal women found that those who took a lot of folate supplements were 22 percent less likely to have breast cancer, compared with those with very low folate intake.

Folate may be protective, particularly against estrogen-receptor-negative types of breast cancer, the researchers concluded in their article, published in the American Journal of Clinical Nutrition in December 2008.

Soy contains isoflavones, a type of plant estrogen, and may reduce the risk of breast cancer or the risk of recurrence in cancer survivors.

Because hormones can fuel breast cancer, researchers have studied whether soy products could be harmful for patients.

Another study presented in a conference held by the American Association for Cancer Research in 2012 found that women who ate half a serving of soy isoflavones a day had a 30 percent decreased chance of developing invasive breast cancer than women who ate almost no soy. In a larger study looking at nearly 10,000 breast cancer survivors in the United States and China, researchers found that women who ate more than 10 mg daily had lower rates of cancer recurrence than those who ate less than this amount. The study was published in The American Journal of Clinical Nutrition in 2012.

Studies have found mixed results when it comes to the health benefits of omega-3 fatty acids, which are found in fish oil and some plants. However, a large recent review of studies showed that women who consumed the highest amounts of fish-type omega-3 fatty acids, either by eating fish or taking fish oil supplements, had a 14 percent lower risk of developing breast cancer. The study was published in the British Medical Journal in June. The amount of omega-3 needed to achieve this reduced risk is equivalent to one or two servings weekly of oily fish, such as salmon, herring or sardines.

A study of nearly 3,000 breast cancer patients and 5,000 women without the disease suggested that higher consumption of these seeds, as well as soybeans, reduced the risk of breast cancer after menopause. The study was published in the journal Nutrition and Cancer in 2012.