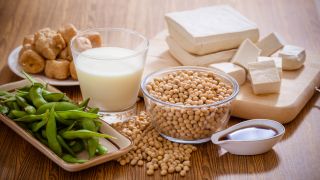 To eat soy or not: That's the question many U.S. women have been asking. Tofu, miso paste and other soybean-based foods are high-quality sources of protein that are low in calories and saturated fat. And studies have shown that they can help prevent cancer.

Yet many doctors recommend that women who have, or are at risk of developing, a common form of breast cancer called estrogen-receptor-positive breast cancer  avoid eating soybean-based foods because they contain compounds called isoflavones. Some studies suggest that isoflavones can mimic the hormone estrogen and encourage tumor growth.

Now, in an animal study, researchers at the Georgetown Lombardi Comprehensive Cancer Center in Washington, D.C., have uncovered a possible reason for the apparent Jekyll-and-Hyde nature of soy — how it can both prevent cancer and fuel its spread. [Top 10 Cancer-Fighting Foods]

The researchers found that rats that were given soybean isoflavones to eat throughout their lives — in particular, one type of soybean isoflavone called genistein — had improved immunity against cancer. But rats that weren't given the isoflavone until after developing breast cancer didn't have that same immune response to kill cancer cells. Instead, these rats had higher rates of cancer growth and higher rates of recurrence after their tumors were removed.

The study may explain why women in Asian countries, who tend to consume high amounts of soybean-based foods throughout their lifetime, have rates of breast cancer that are five times lower than those of women in the United States, the researchers said. The findings were published today (Feb. 1) in the journal Clinical Cancer Research.

More than 200,000 U.S. women are diagnosed each year with breast cancer, and the majority have estrogen-receptor-positive breast cancer, according to the Centers for Disease Control and Prevention. One of the most common drugs to combat this type of cancer is tamoxifen, which acts to reduce estrogen's ability to promote cancer growth.

It's not clear why genistein would have this effect but it may be related to the body's immune system being activated by the isoflavone, recognizing it as a nutrient from its longtime consumption, said study senior author Leena Hilakivi-Clarke, a professor of oncology at the Georgetown Lombardi Comprehensive Care Center.

"The immune system was not activated in animals that started consuming genistein for the first time with tamoxifen," Hilakivi-Clarke told Live Science. This may have resulted in the genistein appearing more like the cancer-fueling estrogen and less like a tumor-fighting agent, she said.

In other words, the paradox is in the timing. It may be that soy consumption is protective only if started before cancer develops.

Despite the lingering ambiguity of whether the same is true in humans, Hilakivi-Clarke thinks the animal study can inform doctors and their patients.

"We have solved the puzzle of genistein and breast cancer in our rat model, which perfectly explains the paradox seen in earlier animal studies and patients," Hilakivi-Clarke said. "While many oncologists advise their patients not to take isoflavone supplements or consume soy foods, our findings suggest a more nuanced message — if these results hold true for women. Our results suggest that breast cancer patients [who ate soy before their diagnosis] should continue consuming soy foods after diagnosis, but not to start them if they have not consumed genistein previously." [6 Foods That May Affect Breast Cancer Risk]

Maggie Neola, a staff dietitian for the Barnard Medical Center and Physicians Committee in Washington, who wasn't part of the study, said that findings from animal experiments often don't translate to humans and that she'd like to see research from population studies with women.

"What we know about soy consumption in humans is that whole and minimally processed soy foods, such as edamame, tofu, and tempeh, have been shown in several studies to protect women from breast cancer recurrence," Neola said.  "Of course, women who want to make any dietary changes following a cancer diagnosis should consult their physicians."