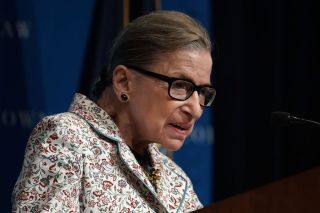 Justice Ruth Bader Ginsburg is in the hospital after falling and breaking three ribs, according to news reports. But why are broken bones and other fall-related injuries so worrisome for older adults?

Ginsburg, who is 85, fell in her office on Wednesday night (Nov. 7), according to The New York Times. She went home afterward, but felt discomfort and was admitted to the hospital Thursday morning, the Times reported. Doctors found she had broken three ribs on her left side.

Fall-related injuries are relatively common among people ages 65 and older, but can be serious or even deadly in this population.

In particular, broken bones can have serious ramifications for the health of older adults, experts say. A study from Denmark published earlier this year found that broken bones can increase the risk of death up to 25 percent over a one-year period among older adults, and this risk remains high for up to 10 years after the injury.

Broken bones "are more dangerous [in older adults] because of the implications of the fracture itself on the overall condition of the patient," said Dr. Gisele Wolf-Klein, director of geriatric education at Northwell Health in Great Neck, New York, who is not involved in Ginsburg's care.

For example, it's not uncommon for older adults with broken bones to need surgery to treat the fracture. And "any surgery with anesthesia is going to create a new challenge for elderly patients," Wolf-Klein told Live Science. Surgery puts stress on the heart, which may be problematic for older adults with heart conditions.

In addition, surgery and the broken bone itself will lead to older adults being less mobile, or bedridden, which can result in complications, Wolf-Klein said. Such complications include pressure sores from staying in bed, or deconditioning that could make someone even more frail and prone to injury.

Being bedridden can also increase the risk of pneumonia in older adults, particularly those with lung conditions such as chronic obstructive pulmonary disease (COPD). That's because, when immobilized, these patients are more likely to develop secretions that stay in their lungs, which increase the risk of developing pneumonia, Wolf-Klein said.

Aging itself also slows down the body's recovery period, meaning older adults may spend weeks in the hospital recovering after a fall.

Given the serious consequences of falls for older adults, it's important to prevent falls among this population.

Ginsburg has faced health challenges before, but has proved to be particularly resilient. In 2012, she broke two ribs without missing work, and she recovered quickly after a heart procedure in 2014, The New York Times reported. She has also beaten two cancer diagnoses – colon cancer in 1999 and pancreatic cancer in 2009. After her second cancer surgery in 2009, she went back to work less than three weeks later.