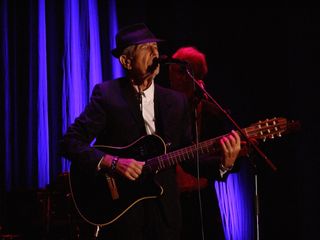 Legendary singer-songwriter Leonard Cohen died after falling in his home, his manager has now revealed, but can falls signal poor health in older adults?

Cohen's death was first reported last week, but on Wednesday (Nov. 16), Cohen's manager Robert Kory released a statement with more details, saying the songwriter fell in the middle of the night, and died in his sleep on Nov. 7. "The death was sudden, unexpected and peaceful," Kory said.

It's not clear if Cohen's death at age 82 was related to his fall. But it's known that several health conditions can affect a person's risk of falling, and in many cases, more than one underlying condition or risk factor causes a person to fall, according to the National Institutes of Health.

"There's usually not just one thing that’s causing the problem," said Dr. Tanya Gure, a specialist in geriatric medicine at Ohio State University Wexner Medical Center. "[Falls] are often a sign of a medical condition, or several things that may have run amok," she said.

Each year, more than one in four U.S. adults ages 65 years and older experiences a fall, and about one in five falls results in a serious injury, such as a broken bone or head injury according to the Centers for Disease Control and Prevention. About 2.8 million older adults are treated in emergency rooms for falls each year, the CDC says. More than half of adults have experienced a fall by the time they are 70, Gure told Live Science. [Best Medical Alert Systems 2016: Top 3 Picks]

According to the NIH, conditions that can increase the risk of falls include:

Certain medications, such as tranquilizers, sedatives or antidepressants, can also increase the risk of falls, because they cause side effects like dizziness and confusion, the NIH says. Doctors may need to speak with patients about decreasing or stopping certain medications, if possible, if the medications are contributing to falls, Gure said.

People who fall should speak with their doctor because it could be a sign of a new medical problem that needs treatment, such as an infection or heart problem, the NIH says. However, studies have found that less than half of older adults tell their health care provider about a fall.

"There's definitely an issue with older adults minimizing [falls] and not wanting to draw attention to that issue," Gure said. "Anytime that that’s happening, that's something that worth bringing to the attention of health care provider," Gure said. "There are so many different levels that we can work to prevent falls."

If an older person hits his or her head during a fall, they should go to the emergency room or see their health care provider right away, because they may have a head injury, Gure said. Head injuries can result in bleeding in the brain, but symptoms of this injury — such as changes in consciousness — may take several hours to appear, Gure said.

About 10 to 15 percent of falls result in a bone fracture and 5 percent result in serious soft-tissue injury or head trauma, according to a 2008 study.

If there are no injuries after a fall, older adults should still tell their health care provider about it. Gure suggested notifying the patient's clinic and scheduling an appointment, usually within a week of the fall.

Of course, not all falls are caused by a medical condition. Factors in the home, including lose rugs, clutter on stairs or lack of a stair rail, can also contribute to falls, the NIH says.

To prevent falls, the CDC recommends speaking with a health care provider who can evaluate your risk of falls, doing strength and balance exercises, having your eyes checked and making the home safer, for example, by adding bars to hold on to in the shower and next to the toilet, putting railings on the stairs and making sure the home has lots of light.

Gure said she also asks her patients about when and where a fall occurred, to figure out how to prevent future falls. For example, if a person falls at night while on the way to the bathroom, changes such as moving the toilet closer to the bedroom and having the lights on, could reduce fall risk, Gure said.

"I try to problem solve with my patients when it gets down to the details of what are the particular triggers for falls," Gure said.

A 2014 study of men ages 70 and older found that those who swam for exercise, as opposed to taking walks or playing golf, were less likely to fall.