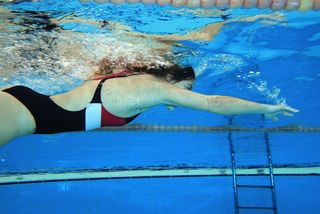 Falling down and getting hurt is a big problem for older adults, and researchers think that physical activity may lower people's risk of falls. But now, a new study suggests that the only type of exercise that lowers older adults' risk of falls is swimming.

Researchers in Australia looked at about 1,700 men ages 70 and older, and compared the types of exercise the men did with their likelihood of experiencing a fall over a four-year period. There were nearly 2,700 falls during the study.

"Unlike [with] land-based sports, swimmers are required to create their own base of support and at the same time, to produce a coordinated movement of both upper and lower extremities," said study author Dafna Merom, an associate professor of physical activity and health at the University of Western Sydney in Australia.

[Check out a sister site of Live Science's called Dignifyed, which has in-depth and hands-on reviews of products related to health and wellness for older people.]

The researchers also found that the swimmers did better on a test of "postural sway," compared with the average of all men in the study. In this test of standing balance, a person is asked to stand as still as possible for 30 seconds, and researchers measure how much his or her body moves, at the waist level, from the center position.

Falls are a major public health problem in older adults. Some falls can cause broken bones, head trauma and other severe injuries, but even less-serious falls can lower people's mobility while they are recovering, and lead to other problems. Among adults ages 65 and older, one in three experience a fall yearly, according to the Centers for Disease Control and Prevention.

The new study is the first to compare various types of physical activity in terms of their ability to prevent falls, the researchers said. Further studies are needed to confirm the findings, Merom told Live Science.

The most common form of exercise that older adults engage in is walking, but studies have shown that walking does not lower the risk of falls, the researchers said in their study, which was published in the Oct. 15 issue of the American Journal of Epidemiology.

In the new study, the researchers asked the men what types of physical activity they had done in the past week, and then followed up with phone calls every four months, to ask the men if they had fallen and, if so, how many times. The men were also given tests that measured their walking speed and balance. The men in the study were all living in communities in suburban Sydney (and not in care homes).

Performing any sort of body movement requires balance, Merom said. The question the researchers wanted to look at is whether some forms of physical activity might enhance people's balance abilities to the degree that they provide an advantage when people are in a situation where they need a quick neuromuscular response to regain their balance.

Although the study included only men, it is likely that swimming also lowers women's risk of falls, Merom said. "I would expect it will work even better for women," given that women generally have less muscle strength than men, she said.

The study was observational, so the results show a link, but not a cause-and-effect relationship, between swimming and a lower risk of falls, Merom noted. For example, it could be that men with good leg strength and control of their posture are more likely than others to participate in swimming. Merom plans to conduct a study that randomly assigns people to a type of exercise, to look at whether there is a causal relationship, she said.

There is reason to think that swimming does work to prevent falls, she said. Swimming develops strong and stable core muscles, which are necessary for good balance control — a major protective factor against falls.

The data suggested that cyclists may also have a lower risk of falls, but there were too few men in the study who cycled for the researchers to know for sure whether there was an effect, Merom said.

Different types of physical activity may benefit people in different ways, she said. For example, dancing may help with the gait speed and reaction time.

"My view is that as people age, they should select and regularly participate in complex motor activities, and not only in functional walking," she said.