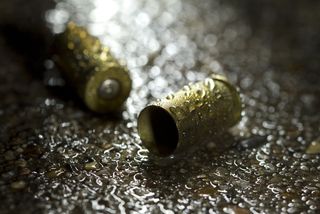 Gun-related injuries are now the third-leading cause of death among children ages 1 to 17 in the United States, according to a new report.

In other words, "About 19 children a day die or are medically treated in an emergency department for a gunshot wound in the U.S.," said lead study author Katherine A. Fowler, a behavioral scientist at the Centers for Disease Control and Prevention in Atlanta. [5 Milestones in Gun Control History]

In the study, the researchers looked at data from three national databases: the National Vital Statistics System, the National Electronic Injury Surveillance System and the National Violent Death Reporting System. Based on these data, the researchers looked for trends in gun deaths and gun-related injuries among children that occurred between 2002 and 2014. Injuries from guns have been the third-leading cause of death for children ages 1 to 17 since the year 2000. In the 1990s, guns were the second-leading cause of death in this age group, due to higher rates of youth homicide during that time, according to the CDC.

For example, the researchers found that each year between 2012 and 2014, the majority — 53 percent — of gun deaths in children were homicides, while 38 percent were suicides. The remaining deaths were classified as accidents, law enforcement shootings and "firearm deaths of undetermined intent," which means that the circumstances that led to those deaths were not clear.

Of all children, three groups — boys, older kids and black children — were the most likely to die in shootings, according to the study, published today (June 19) in the journal Pediatrics. Of the children who died between 2012 and 2014, 82 percent were boys, the researchers found. The rate of firearm-related deaths among children ages 13 to 17 was 12 times higher than the rate of such deaths among children younger than 13. And the mortality rate among black children was 4.1 deaths per 100,000 children per year, which was 10 times higher than the rate among non-Hispanic white children and Asian/Pacific Islander children, the researchers found.

The researchers also found that overall, suicides involving guns decreased between 2002 and 2006 but increased by 60 percent between 2007 and 2014.

The rates of homicide involving guns among kids were higher in states in the South and the Midwest, compared with states in other regions, the researchers found. However, the researchers did not examine why this might be, Fowler told Live Science.

The results of the study "highlight the need for evidence-based solutions to address this public health problem," of gun deaths and injuries among children, Fowler said. [9 Weird Ways Kids Can Get Hurt]

Other types of approaches involve school-based programs that teach children and young people to "manage emotions and develop skills to resolve problems in relationships, school and with peers," Fowler said. Another strategy involves sharing information about safe practices for gun storage, which previous research has shown to reduce both teen suicide attempts and unintentional firearm deaths among children, Fowler said.