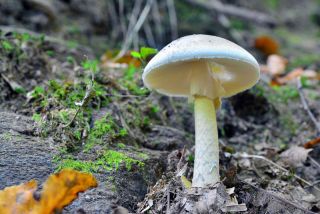 More than a dozen people in Northern California recently became seriously ill from eating wild "death cap" mushrooms that they gathered themselves, according to a new report.

During the first two weeks in December 2016, the California Poison Control System received reports of 14 people who had to be hospitalized after consuming wild death cap mushrooms, known as Amanita phalloides. The mushrooms can be deadly, but all of the patients in this outbreak recovered. Three of the patients required a liver transplant, including an 18-month-old infant.

The cases occurred around the same time that Northern California saw a rise in the growth of wild poisonous mushrooms, due to increased rainfall in the region. This particularly large outbreak of serious mushroom poisonings may have been related to that spike in growth, although it's not possible to prove this, the researchers said in the report. [11 Odd Facts About 'Magic' Mushrooms]

Given the potentially lethal consequences of consuming wild mushrooms, the researchers stressed that people should eat wild mushrooms only if the mushrooms have first been evaluated by a trained mycologist, or an expert in fungi.

"Inexperienced foragers should be strongly discouraged from eating any wild mushrooms," the researchers wrote in their report, published today (June 1) in the Center for Disease Control and Prevention's journal Morbidity and Mortality Weekly Report.

The death cap mushroom is responsible for most deaths related to the consumption of wild mushrooms worldwide, the report said. The mushroom contains toxins known as amanitin, which damage liver cells. Up to 20 percent of people who consume the mushrooms die from poisoning, the report said.

Five of the 14 people who became sick had eaten the mushrooms together, at a dinner. The five included a family of three — the woman who prepared the dinner, a man and their 18-month-old daughter — along with the woman's sister and a family friend. The woman had gotten the mushrooms from a stranger she encountered, who had picked the mushrooms earlier in the day in the mountains, the report said.

About 9 hours after eating the mushrooms, all five experienced nausea, vomiting and diarrhea, and went to the emergency room (ER) within one to two days after their symptoms began.

The parents spent about six days in the hospital, after which they recovered. However, their daughter developed liver failure, and required a liver transplant. Following the transplant, she developed complications, including fluid buildup in the brain and permanent neurological damage, the report said.

The woman's sister went to the ER within a day of her symptoms, but was initially sent home with a diagnosis of gastroenteritis. She later went back to the ER because she continued to experience symptoms, and was then hospitalized. She also developed liver failure and needed a liver transplant four days later, after which she improved, the report said.

The family friend didn't consume as much of the mushrooms as the others, and was hospitalized two days after their dinner. The friend also recovered after six days and was released from the hospital.

All of these patients were given intravenous fluids, and a drug called silibinin, which is derived from the milk thistle plant. Silibinin is not approved for use in the United States, but the patients received the drug as part of a clinical trial to see whether it is effective at treating liver problems resulting from eating death cap mushrooms, the report said.

This outbreak of serious mushroom poisoning cases is large, but not unheard of for the area. In 2012, 30 people in California were admitted to the intensive care unit between January and November due to mushroom poisonings, and five people died, according to Food Safety News.