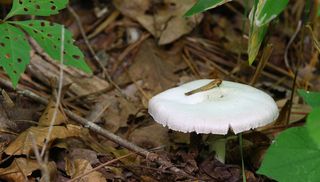 Eating wild mushrooms is dangerous, as a new report highlights: A woman in Canada recently suffered liver failure and needed a liver transplant after consuming poisonous mushrooms she found in a park.

The woman was able to get the transplant at short notice, but if she had not, the outcome of her case could have been much worse, said Dr. Corey M. Stein, of the University of Toronto, who treated the woman and co-authored the new report of her case. "Mushroom poisoning can be fatal," Stein said. "And has been — there are case reports to support that."

Before she ate the mushrooms, the 52-year-old woman was generally healthy. She had gone foraging for wild mushrooms in a local park with her husband, who had previous foraging experience.

About 12 hours after eating the mushrooms, the woman was admitted to a hospital, suffering from severe abdominal pain, nausea, vomiting and diarrhea. Doctors treated her with medications and activated charcoal to quicken the elimination of mushroom toxins from her body. [6 Ways Fungi Can Help Humanity]

But the following day, the woman's condition worsened. Soon, she developed liver failure, and needed a liver transplant. There were no complications from the procedure, and the woman went home 10 days after the surgery.

The woman brought samples of the mushrooms that she ate to the hospital, and the doctors identified them as Amanita bisporigera. This type of mushroom has a toxin that can damage liver cells and therefore cause liver failure, Stein said.

People who consume these mushrooms typically go through three phases of poisoning symptoms, the researchers said. The first phase, which lasts from 6 hours to one day after eating the mushrooms, involves severe gastrointestinal symptoms including nausea, vomiting, abdominal pain and diarrhea.

The second phase lasts from one to two days and is a "false recovery" period, in which the patient's condition appears to improve. During this phase, people are sometimes discharged from hospitals or emergency departments prematurely, the researchers said.

In the final phase, which occurs about two days after a person eats the mushrooms, the patient's liver begins to fail. This typically leads to the failure of other organs in the body and, potentially, death.

"Foraging and eating wild mushrooms carries the risk that misidentification may lead to poisoning," the researchers wrote in the report, published today (July 13) in the Canadian Medical Association Journal. Distinguishing between edible and poisonous mushrooms is challenging even for experts who specialize in mushroom research, the authors wrote.

People should be aware that some poisonous mushrooms look similar to edible ones, Stein said. If the identity of a mushroom that is being foraged is uncertain, it should be left alone and should not be eaten, he said.