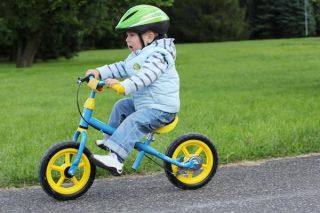 There's no shortage of strange ways a child can get hurt. Parents can diligently childproof their home, always buckle youngsters into car seats and never leave children alone in the tub, yet, kids will somehow find unexpected ways to injure themselves.

"We live in a world designed by adults, for the convenience of adults, and the safety of children is often not considered," said Dr. Gary Smith, director of the Center for Injury Research and Policy at Nationwide Children's Hospital in Columbus, Ohio. Whether it's toppling TV sets or chomping on laundry-detergent pods, there are many hidden hazards that can pose a threat to kids.

Parental supervision is often not sufficient to prevent injuries in kids, Smith said, because it's not humanly possible for parents to be there 100 percent of the time. "There are going to be lapses of supervision," he said.

Parents need to know when they can turn their back because their child is in a safe, familiar play area, and which situations require watching their kids all the time because there is no margin for error, such as when kids are in or around water, Smith noted.

Here are nine ways that children may hurt themselves, including threats that some safety-conscious parents may never have imagined could be dangerous.

The number of children getting hurt on inflatable bouncy houses is rising steadily. A 2012 report in the journal Pediatrics estimated that nearly 65,000 children were treated in U.S. emergency rooms forbouncy-house-related injuriesbetween 1990 and 2010.

"We're not saying children shouldn't use them, because we want kids to have an active lifestyle," Smith explained. However, adult supervision is needed to minimize collisions and discourage high-risk moves, such as flips, Smith said. He also suggested making sure that children using the bouncy house at the same time be a similar age and weight.

Small, round and shiny, button batteries can easily catch the eye of a curious child. More kids are noticing these coin-size batteries at home, since this type of battery is becoming an increasingly popular way to power everything from toys and TV remotes to watches and cameras. In fact, a recent study linked button batteries with nearly 84 percent of children's battery-related emergency-room visits between 1990 and 2009.

"[The battery] can lodge in the esophagus, where it can burn a hole in less than two hours," Smith said.

To prevent these incidents from occurring, parents can tape the battery compartments of household items shut and store extra batteries out of youngsters’ reach.

Little ones can get big, itchy rashes, including a newly recognized type known as car-seat dermatitis.

The condition typically results from hot temperatures, sweaty surfaces, and a shiny, nylon-like car-seat material coming in contact with a baby's skin. More commonly seen in late spring through early fall, this red rash usually flares up on exposed skin on the back of infants’ legs, elbows and scalp.

Dermatologists are still unsure of its exact cause, but they suspect the skin irritation may be triggered by an allergy to a foam used in nylon-lined car seats, or a reaction to a flame retardant used by manufacturers to prevent mold. The rash often can be avoided by placing a barrier, such as cotton padding or a soft sheet, as a liner between the child's skin and the seat's nylon surface.

Parents love to play counting games on babies' teeny fingers and toes. But if a strand of hair or piece of thread unexpectedly gets wrapped around a baby's delicate digits, it can cut off circulation to the area.

"I've seen scores of children with this condition, but most parents have never heard of it," Smith said. It may be hard for parents to spot a single hair or thin fiber tightly coiled around a child's finger, toe or boy's penis, the three places where hair-thread tourniquet syndrome is most likely to occur. Instead, parents may notice a swollen toe turning purple and their infant crying inconsolably in pain.

"It's a major poisoning issue," said Smith, who has seen kids go into a coma after mistaking the small, shiny pods for a sweet treat.

Last year, the Centers for Disease Control and Prevention warned consumers that these concentrated packs of detergent are an "emerging public-health hazard" in the United States, especially for kids ages 5 and under.

Although these detergent packets have been on the market in this country only since 2010, they represented nearly half of the laundry-detergent exposures in children reported to poison centers between mid-May and mid-June in 2012.

The most common symptoms seen when kids ingest the pods include vomiting, coughing, choking and drowsiness.

Magnets have long been a choking hazard to children. Smith said a newer concern involves high-powered, rare-earth magnets, which pose a special risk to kids.

Found in adult desk toys marketed as stress relievers and sold as Buckyballs and Zen Magnets, these tiny, ball-shaped magnets can be accidentally swallowed by children or teens while playing with them or pretending they are tongue or lip piercings.

Swallowing two or more of them is dangerous because the magnets can attract each other while within the intestines, causing obstructions, tissue damage and even death.

Since 2008, theU.S. Consumer Product Safety Commission (CPSC) has received more than 200 reports of these magnetic balls being swallowed by children, some of whom needed emergency surgery to remove the balls and prevent life-threatening injuries.

It may seem safe for a toddler to sit on an adult’s lap while going down a slide. But parents sliding down with children may do more harm than good. In fact, doing so can increase a child’s chances of winding up in the emergency room with a broken leg, doctors say.

When coasting down on a parent's lap, a child's rubber-soled shoe might get caught on the sides of a curvy slide or on its plastic surface, making it hard to free the foot because of the extra momentum from an adult's weight. Parents could also fall on top of a small child after sliding down.

Smith recommended that parents who accompany toddlers on a slide be the only ones to place their legs in contact with the slide. In other words, the child should rest entirely in the adult's lap.

Others have recommended that toddlers slide by themselves, with parental supervision.

Junk food may not be the only danger lurking in the grocery aisle: The American Academy of Pediatrics reports that shopping-cart injuries send more than 23,000 children a year to the emergency room.

Shopping-cart injuries usually result from falls to hard surfaces, or when a cart flips over, causing head and neck injuries, or broken bones.

"The problem is, shopping carts were never designed to safely transport children; they were designed to transport groceries," Smith said. Accidents can happen when children ride on the outside of the cart or hang onto it, or when kids try to stand up in the basket or climb out of the cart. Smith said keeping kids low to the ground in cart attachments is the best bet.

Young children climb onto dressers, bookcases or storage cabinets in an attempt to reach a toy or TV set, sometimes, with fatal results. These heavy items can topple over, fall onto a child and pin someone underneath, injuring, or even killing, a youngster.

A report released last year by theCPSC found that 349 Americans, 84 percent of whom were children younger than age 9, were killed between 2000 and 2011 when TVs, furniture or appliances tipped over onto them.

The study also estimated that more than 25,000 children are hurt every year from these tip-overs.

Smith said TVs account for half of the injuries resulting from fallen furniture. He suspects these injuries are on the rise because more families are buying lighter, flat-screen TVs, and then moving their older, heavier televisions into rooms without an appropriate TV stand or anchoring device to stabilize the set's weight and size.

Pass it on: Hidden dangers could hurt, or even kill, children. Take these steps to keep your kids safe.