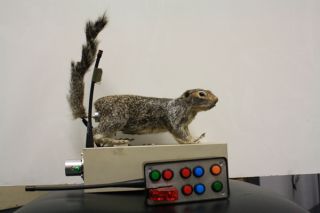 In most wildlife documentaries, once a predator sees prey, it’s immediately “game over:” The prey will be swiftly and predictably mauled, killed and then devoured by the predator.

But research led by Rulon Clark of San Diego indicates that encounters between at least some predators and prey may be surprisingly intricate, with outcomes at least sometimes determined by subtle communications between the animals.

Clark suspects that the squirrel’s tail signals tell the snake something akin to, “I see you, and, therefore, you have lost the crucial advantage of surprise. I am prepared to dodge and escape your attack. So don’t even bother wasting your precious energy on a potentially futile attack.” According to Clark’s research, such tail signaling may — as intended by the squirrel — inhibit the snake from attacking.

Clark’s hypothesis about the purpose of squirrels’ tail wagging is supported by the results of his experiments involving encounters between live, wild rattlesnakes and a mechanical, life-like squirrel — built by Clark’s team — that can be manipulated by remote control to recreate key elements of squirrel behavior.

The video featured here shows two of Clark’s experiments with the mechanical squirrel:

Note that these types of experiments cannot be conducted with live squirrels because their behavior can’t be manipulated on command, as required for controlled experiments. By contrast, the mechanical squirrel’s behavior can be easily manipulated to support comparisons, like those included in Clark’s video, of a snake’s response to varied squirrel behaviors.

Learn more about Clark’s research by: