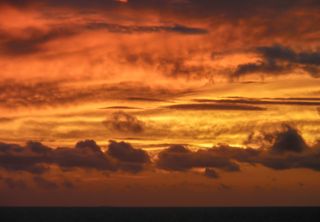 The bottom of the sea can be a gassy place. Underwater volcanoes and vents spew carbon dioxide (CO2) near the crevices where tectonic plates rift apart. Hungry bacteria convert decomposing creatures of the deep into natural methane. And, new research from Japan reminds us, enormous, miles-wide reservoirs of greenhouse gases lurk in untouched pockets just below the seafloor.

In a study published Aug. 19 in the journal Geophysical Research Letters, a team of researchers discovered one such pocket at the bottom of the Okinawa Trough, a massive submarine basin sitting southwest of Japan where the Philippine Sea plate is slowly sinking below the Eurasian plate. Using seismic waves to map the trough's structure, the team found a huge gas pocket stretching at least 2.5 miles (4 kilometers) wide and potentially containing more than 100 million tons (90.7 million metric tons) of CO2, methane or some combination of the two.

Depending on its contents, this massive stash of seafloor gas could represent an untapped source of natural gas, or a ticking time bomb of greenhouse gas emissions just waiting to seep up to the surface, the researchers wrote.

"If the gas is assumed to be all CO2, I would very roughly estimate it to be about 50 million tons,[45 million metric tons]," study co-author Takeshi Tsuji, of Kyushu University's International Institute for Carbon-Neutral Energy Research in Japan, told Live Science in an email. "This amount is on a similar order to the annual CO2 emissions of all private cars in Japan (about 100 million tons [907 million metric tons] per year)."

In the new study, Tsuji and his colleagues sailed over the central part of the trough, then used an air gun to generate seismic waves from various angles. By measuring how these waves changed as they passed through the seafloor, the team created a rough profile of the hidden world below the seafloor.

"Seismic pressure waves generally travel more slowly through gases than through solids," study co-author Andri Hendriyana, another researcher at the International Institute for Carbon-Neutral Energy Research, said in a statement. "Thus, by estimating the velocity of seismic pressure waves through the ground, we can identify underground gas reservoirs and even get information on how saturated they are."

Pressure wave velocities slowed down significantly over a wide area in the middle part of the trough, indicating a massive gas pocket. The team estimated that the pocket's width, but were unable to calculate how deep or concentrated the reservoir was.

With the current data, they could not determine whether the gas in question was CO2 or methane (two abundant deep-sea gases), which makes the implications of the discovery a bit murky at the moment.

"On one hand, if it's methane, it could be an important resource," Tsuji said. (Methane, the main component of natural gas, is used as a fuel around the world.) "However, methane is also an important gas for climate change."

Following CO2, methane is the second most-common heat-trapping gas in Earth's atmosphere, and accounts for about 15% of global greenhouse gas emissions, according to the Environmental Protection Agency. Methane concentrations in the atmosphere have skyrocketed by nearly 150% in the last 250 years, NASA reports, and those numbers will likely continue to rise as global warming continues releasing methane once trapped in Arctic permafrost.

If, however, the gas in the undersea reservoir is mostly CO2, it could have an even greater impact on climate change. If the pocket were to pop and release 50 million tons (45 million metric tons) of CO2 into the air at once, it could have a measurable effect on CO2 concentrations in the atmosphere, and thus on climate change. If pockets like this one are a widespread feature at ocean rifts, as the researchers suspect they might be, then the potential consequences could be even more significant.

For now, though, there's just not enough data to make any specific conclusions about what's in the reservoir, where it came from, and what's going to happen to it. Further study of the Okinawa Trough and other ocean rift sites will be key in figuring out who (or what) dealt the mystery gas — and who has to deal with it next.